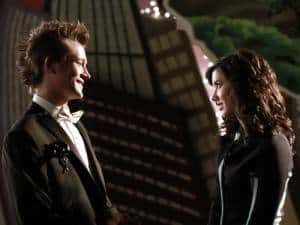 The defacto series finale is one of the toughest things to pull off in television. You have to try and stay true to the plot that you’ve unspooled over the season while offering enough finality to make the possible ending of the show not sting as much. If you leave enough plot points hanging, you might come off as arrogant or insensitive to the ratings situation the show is in; if you bring about too many happy endings, it can feel unearned and make the storytelling suffer as a result, particularly since things will have to get messy again should there be a renewal. It’s the tighest of tight ropes for bubble shows like Jane by Design and one false move and you’re falling into the abyss known as not being able to stick the landing.

Jane by Design had to try and figure out how to bring the relationship drama to an end while bringing Jane’s worlds colliding once again and promising happiness to at least a few characters. Complicated, right? For the most part, though, “The Bonus Check” was solid and had all the makings of a pretty decent little finale. The amount of resolution was particularly surprising, as the play went off despite numerous hitches (ruined costumes saved by Donovan Decker, a very Nomi Malone-esque pratfall and leading man switcheroo) and Ben and Rita came to terms with where they wanted to be. Although the play ended up being one giant plot device, I have to admit that it served a fine function and brought the action a little more to Jane’s school life, which can sometimes get the shaft in favor of sexy fashion drama. You had all these kids bunched together, tended to by Amanda Clark (who may not have entirely fit into the Jane by Design-verse, but provided several fun moments), and allowed to bounce off of one another, which gave Nick, Harper, Lulu, and Zoe a little more purpose in the season. It may have been a little too perfect that everything ended up going off without a hitch, the crowd loving Billy stepping in at the last minute, but it was fairly cute and made for a good stage for the drama to go down.

Relationship drama dominated the finale, though, with Ben and Rita getting back together and Billy and Jane staying apart…for now. The back half of the season relied heavily on these two dynamics and they delivered in spades in the finale; Jane by Design may be a very premise-y show, but beneath all the scurrying around 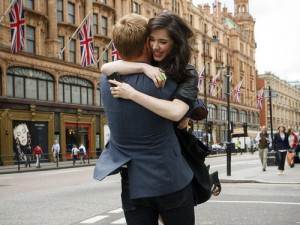 the city and beautiful clothes, it’s a tender character drama and tends to shine when simply letting these people interact with one another. Ben and Rita’s little love triangle-turned-communication tango was one of my favorite things about the summer season; you knew and I knew that they were going to get back together in the finale, but that didn’t take away from the sincerity and romanticism of their scenes together, particularly the kiss on the baseball field. They have such a nice dynamic between the two of them and, like the rest of the show, I can forgive some narrative problems because I simply like watching them together; Ben’s weirdness brings Rita out of her shell a bit, Rita’s maturity helps bring Ben back to earth once he gets going. They’re two outsiders scared of being hurt that opened up to one another and found the thing that they’d been missing, which is extremely sweet to watch unfold.

Jane by Design has done a good job of making you care about these people. I want good-natured Ben to find somebody to make him happy. I want eternal nerd Rita to bag the high school crush she thought she’d never have a chance with. And I want that because I like these characters so much, so good on you, show. But sometimes happiness isn’t the answer, like with Billy and Jane. Even though I do want them together eventually, and think that if we don’t get anymore episodes that they’ll be together someday, I liked that the show went against expectations and kept them apart for a little while longer. And that, instead of Billy being the one to ready to put himself out there, it was Jane who couldn’t deny her feelings any longer, having been confronted by that fact by Eli. But like the spring finale, it came down to timing issues and Jane could never say what she had to say before Billy mentioned how happy he was in his relationship, eventually leaving the play with his girlfriend. Jane by Design can get a little cutesy for me, but it’s stuff like this that keeps me so enthralled with the show – when it makes an unexpected choice, it can be quite powerful and the sadness absolutely dripped from every interaction between the two tonight. (Case in point: Billy’s final look back at Jane before leaving the play.)

There was so much unsaid and so much subtext that their scenes had a little more emotional complexity than the rest of the show. You felt the pain, you felt the confusion, and even though you wanted them to be together, if the show can pull this type of material from their separation, I’m okay with them being apart. For now.

The only (real) issue that I had with “The Bonus Check” was the “cliffhanger” ending, which saw Gray and Eli coming face to face with Jane after the play, much to their surprise. I’ve never been a huge fan of teasing the dissolution of Jane’s double-life, mostly since if it happens there’s no show (= everything they do toward it has no stakes), and this was no different. I don’t know if the mirroring of the runway incident from the spring finale was an intentional device used, but it was just rote, unnecessary, and easy to get out of; Jane could make up something very plausible on the spot and not have to worry about her cover being blown, so it had little to no sting for me. (Jeremy talked of hiring her to his new company, like, 5 minutes before that, so the girl has job security either way.) I mean, there was nothing definitive or incriminating about Jane being backstage at the play or having been in charge of the costumes. At all. And even if there was, I don’t think that something like that was the note to go out on, series finale or not; Jane’s career and her connection to the adult world aren’t the main column holding up Jane by Design. It’s her friendship with Billy and should this be the final episode, I’d much rather the last note be bittersweet from their complicated connection than false from drama that didn’t need to be there.

Thoughts, Quotes, & Observations:
-“And you call yourself a geek? Leave me. Go.”
-India and Jeremy are back together (oddly, I’m for it), with Jeremy starting a new label after quitting Donovan Decker. And it’s very strongly implied that he’ll be trying to poach Jane to join his team.
-Favorite clothing item: India’s tan jacket + little red dress combination was gorgeous.
-I love that Nick and Billy are bros again. I don’t know why, but their friendship tickles me.
-Rita walking by cheerleaders after kissing Ben (in public!) was so silly that I adored it.
-Did anyone notice the Asian mafia boss from Awkward. made a brief appearance, congratulating Jane on her party? I got intimidated, I can’t lie.
-Television Without Pity argues for a second season of Jane by Design. I agree.
-I appreciate you guys reading and sharing my reviews this summer. I hope Jane comes back so we can convene once more and talk about clothing, boys, and how much we all love Jilly. (If you’d like to follow me on Twitter or ask me any Jane/TV questions, I’m @mahogany_soul.)