Home
Jane By Design
Jane by Design 1.17 “The Sleepover” Review 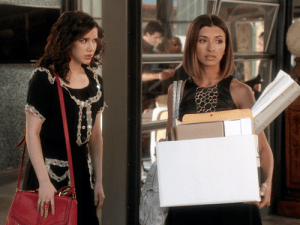 One of the main criticisms that I’ve had about Jane by Design is that it can veer into becoming cliche through the overuse of false danger and cliche 80s movie-esque sequences. The show is very lighthearted and arguably the “feel good-iest” feel good drama on the air right now, so you don’t expect the type of tension, edge, and pathos that you’d find in, say, a more adult drama on premium cable. However, to see the same tropes trotted out over and over can get a bit frustrating, especially when the show has proven that it doesn’t have to rely on stuff like that in order to be compelling. It has all the elements to make the leap in quality that it’s been edging toward during the back-half of the season, but time and time again, it falls back on old habits.

But the show has yet to lose its likability, which may be why “The Sleepover” worked so well for me. It had all the elements of something that I’d pan – Jane scurrying about doing something for Donovan Decker, the continual pretending that Kate/Ben are home, the requisite “teen party” scene – but this ended up being a charming, bubbly hour of television that I kind of loved. It helped that each of the things I mentioned actually moved the plot forward and/or were executed distinctly/cleverly enough that the entertainment factor eclipsed any complaints I might have had. For example, Jane going to London to find Jeremy was a work thing that actually meant something to the future of the show, as the runaway designer had to Harrods designs (and didn’t give them up in the end), effectively ending the partnership between the company and Donovan Decker. If they have to send Jane fluttering all over the world as Gray’s gopher, giving her actions meaning makes each scene feel more important and less perfunctory, which the summer episodes have done. Donovan Decker having, basically, one client may have taken the procedural-y nature out of the show, but you get more invested in the actual work and the scenes regarding the future of Donovan Decker therefore have more weight.

The party worked really well, both in planning and in execution, as Billy and Jane got to spend more time together and had to indirectly confront their relationship as a result. All summer, the two have been dancing 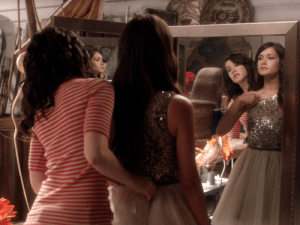 around one another, longing looks and pointed statements aplenty thanks to their premiere confrontation, but in “The Sleepover”, that awkwardness took a bit of a backseat and Billy and Jane became Billy and Jane again. The cold open horror parody, which could have been a weird tonal shift, ended up being quite cute thanks to what we know about their friendship and how well they interact; they may be interacting too well, though, since Billy’s girlfriend is jealous of the time that he spends with Jane. In a lot of ways, removing Ben was the catalyst for the dam breaking tonight; if he didn’t leave, Billy wouldn’t stay over every night and if Billy didn’t stay over every night, he wouldn’t be fighting with his lady over his friend-relationship with Jane. And I like that they’re finally having to confront it, not from one another but from other people, especially if it leads to Jane standing up for herself with Zoe again like we saw tonight.

Jane might be extremely naive and even more sensitive, but I like seeing proactive, headstrong Jane pop up every now and then. It’s a sign of growth and, interestingly, a sign of something that she’s passionate about.

But her love life might be taking a very different turn, though, as Eli and India hooked up over their mutual feelings of being shut out by the ones they care for. Not only did it become revealed through an interesting camera trick (I genuinely thought it would be Billy and Zoe), it could shake up the office dynamic at Donovan Decker and finally made India seem like a human being with insecurities and a need to be loved and appreciated. Ironically, hooking up with Eli (and in the process, hurting Jane) is the most human that India’s ever been and the closest we’ve come to being able to understand the impetus behind her snarky disposition. It feels like Jane finding out about the hook-up (which will happen in the finale, I will guarantee) is meant to drive her even more toward being with Billy. She’ll be distraught and reaching out for the only person that’s been there for her time and time again, but it may be in a different way this time. Losing Eli would remind Jane of how deep her love/connection with Billy is (see also: her comment about Billy being the “exception” and her worries about bringing Eli into her other world), but since he made up with his girlfriend at the party, it might be too late for another shot at being together once and for all.

I can’t help but be charmed by Jane by Design and “The Sleepover” played right into that. The show may not be reinventing the wheel, but when everything’s executed well, it’s one of the most pleasant things on television, guaranteed to make you smile with how unabashedly goofy, sensitive, and lovely it can be. Gags like the “Kate’s in the shower” bit, complete with Ferris Bueller-y sound effects, and Carl the janitor being invited to the party might be a little rote, but they fell on the right side of silly and I have to admit, I enjoyed them greatly because of how darn likable this show is. Every potentially poor moment had a purpose in terms of the storytelling and even if they didn’t, this was an episode where Jane by Design really brought the funny and delivered in spades.

Thoughts, Quotes, and Observations:
-“So counting Zoe, we’re up to…three people, including us.”
-“I don’t know, Jane. I don’t speak girl.”
-“You see this loop? You’re not in it.”
-“When do you usually bathe, Miss Shaw?”
-Nick’s back in the play after Billy bro-pologized. Again, the whole jock-really-likes-theater angle’s been done a lot (a lot), but I like Nick having screen time and some actual connection to the other people on this show.
-My major complaint about the episode: Very, very little London. Also, is this the end of Jeremy?
-Harper ruined the dress Jane made. I think I know next week’s crisis.
-Favorite clothing item: Eli’s gray/green jacket. I hated Jane’s black dress in the same scene, though. Way too old for a young girl to be wearing.
-“Call Me Maybe” in the party scene. I loved it. Love.
-Next week on Jane by Design: Billy chooses between the ladies in his life and Jane gives up her bonus check to fund the school play.