Home
Jane By Design
Jane by Design: Spoilers for the Mid-season Premiere 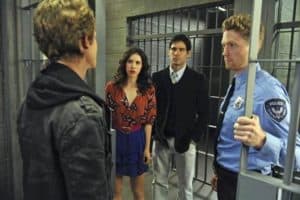 The second half of Jane by Design‘s first season is looking to up the ante that much more from its first set of episodes. Now, Ben knows about Jane’s time at Donovan Decker, Billy has to deal with time in jail (and his feelings for Jane), and Jane must continue her forward movement in the company without anybody finding out her true identity, all the while choosing between Billy, Nick, and Jeremy. It’s a completely different type of life than Jane envisioned once she took the job at Donovan Decker, extraordinarily chaotic and filled to the brim with activity, but something tells me that we’ll see her really settle in during the upcoming run of episodes.

She’s always loved fashion, but it took a few episodes for her to grow into her role at Donovan Decker. With a little experience under her (fabulous) belt and India out of the way, for now, Jane’s comfort level could rise pretty rapidly, but will she still remember who she is upon achieving even more success?

Listed below are the dates, initial airings, episode names, and episode descriptions for Jane by Design‘s first two episodes back, where it looks like Jane may be close to forgetting her roots.

TUESDAY, JUNE 5 (9:00-10:00 p.m. EST)
“The Replacement”
Jane is scrambling to get a handle on both her personal and professional life. With Billy returning from juvie, Jane is nervous about how things were left and what that means now for the two best friends. But, she doesn’t have too much time to think about it because with India now gone from Donovan Decker, Gray is leaning on Jane more than ever. Jane starts to wonder if she may have a shot at the job, with a little encouragement from Jeremy, but some stiff competition might be standing in her way. Interior designer Martyn Lawrence-Bullard (from Bravo’s “Million Dollar Decorators”) stops by the Donavan Decker offices to spruce up Gray’s office. Meanwhile, Ben tries his best to keep Jane’s secret safe even though it is affecting his new relationship with Rita.

TUESDAY, JUNE 12 (9:00-10:00 p.m. EST)
“The Celebrity”
It’s bad enough that the Donovan Decker team has to win the approval of India to clinch the coveted new Harrod’s fashion line, but now they have to also dazzle movie star Aiden Redmond – the new celebrity face of the retail chain. With his Hollywood looks and charm, it is only a matter of time before the whole team is smitten. Now with access to one of Hollywood’s top leading men, will all the fame and celebrity get the best of Jane? Meanwhile, Billy is still struggling to fit back into daily life of high school and his new reputation.

Jane by Design returns Tuesday, June 5th at 9:00 following Pretty Little Liars. A marathon of the first 10 episodes will be airing two days prior on SOAPnet.