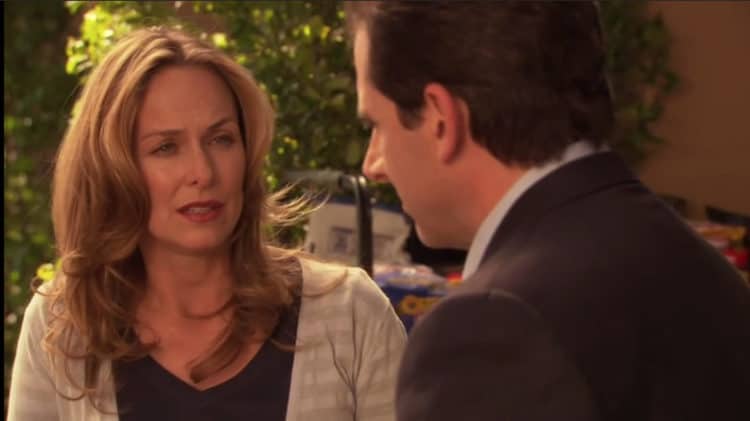 It’s a bit difficult to know whether to say that the dedication to a show such as The Office is touching or if it sometimes borders on obsession since people have been wanting to know who the father of Jan’s baby is for a while, and the reveal was actually something that might not mean a lot to some folks. Just to get it out of the way, the sperm donor that is technically the father of little Astrid is Andy Roddick, a famous tennis player that often visited Rainn Wilson on the set and was written into the plot to liven things up a bit. That’s not so horribly out of bounds really since professional athletes being used for various roles has happened over the years and it’s been just fine. But the fact that the reveal was cut from the season is kind of odd since it does feel as though it might have been better to leave it in and to possibly let Michael’s dejected manner become another part of the gag. But it does feel that so long as people know at this point that satisfaction is about the only thing that really matters and folks can move on. At least, that’s the driving through behind this at the moment. Trying to get people to ‘move on’ isn’t always as easy as it sounds since some folks might want to know the aftermath of Jan finding out who the father is, and some might want to obsess on the story moving forward, which isn’t going to happen since it doesn’t appear that The Office has any plans to return at this time.

Even after all these years one can’t help but be amazed how often fans will cling to their favorite shows and seek to theorize and analyze various episodes and moments of the show no matter that the actors and everyone else will have moved on at that point. To some, this might mean that the folks that do this have next to no life and for some reason have to keep going back to moments that made them happy or have stuck with them for some reason. But there are plenty of those that have moved on but still find the need, or the desire, or both, to revisit old memories and worry at it like a sore tooth. It does appear that knowing more about Jan’s baby would be enough but as anyone should be able to guess at this point it’s likely that some folks will try to take it further and possibly come up with a scenario or two that shows how things went after the reveal. Some might want to roll their eyes and think that enough should be enough since the show isn’t coming back and likely wouldn’t be picking up old ideas if it did, but letting people have their fun sounds like a much better idea since this is something that people tend to enjoy and it does pass the time now and then. Seriously, some folks are still theorizing over shows that have been done and over with before the year 2000 ever came along, which sounds like a sad way to enjoy your time but is actually kind of interesting when a person thinks about it.

As always this shows how The Office really managed to capture the imaginations of so many and hooked a lot of fans into caring about what happens to the characters. Following your favorite show for this long and decided to invest this much into it isn’t exactly news considering that so many do it, but given that some shows are more popular than others it’s bound to happen that theories are going to keep rearing their heads to be noticed every now and then and people are going to take the bait and start wondering what really happened to the characters they came to think about on a deeper level. It’s funny really, but when The Office first took off it was easy to think that a lot of people might not really care for those or be able to get this involved in it, but not long after it was released it became obvious that people had fallen for the idea and had definitely selected their favorite characters. It’s also obvious that things changed in a big way from the beginning to the end of the show, and while some followers didn’t make the entire trip from the first episode to the last, plenty of people have been willing to sit down and read the many theories that have been devised and give their two cents on matters that they might not have known much about or possibly saw coming early on in the show. Jan’s baby though was something that a lot of people wanted to know about.