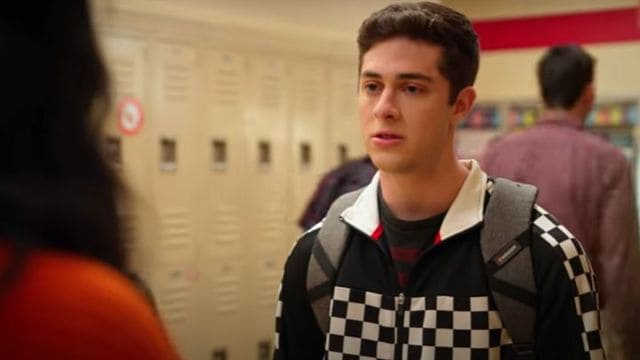 Just a few months ago, Jaren Lewis wasn’t a name that most people were familiar with. However, that is slowly changing thanks to his role on the Netflix show, Never Have I Ever. Jaren plays Ben, a high school student who constantly antagonizes the main character, Devi. Although his character isn’t always the most likeable person, Jaren plays the role with style and grace. As the show’s popularity continues to grow, so does Jaren’s and it looks like this opportunity is going to be the first of many.Â  Continue reading for 10 things you didn’t know about Jaren Lewison.

The show Barney and Friends was a staple in countless childhoods for almost 20 years. Jaren got to experience the magic of the show first hand when he was a kid thanks to a recurring role in the series where he played a young boy named Joshua.

2. He Was A High School Football Player

Although Jaren started acting at a young age, he was still able to have a typical life. He attended a local public high school and was a member of the football team. It doesn’t look like he’s decided to pursue organized sports after high school, but he’s still a football fan.

The average college student’s idea of a job is working at a local store or restaurant, but Jaren Lewison clearly has a different idea. He is currently enrolled at the University of Southern California and says that he really loves school.

4. He Has A Close Relationship With His Family

When you work in the entertainment industry, it’s really important to have a strong support system to keep you grounded when things get crazy. For Jaren, that support system is made up of his loving family. He has a great relationship with both of his parents and they both seem very supportive of all the things that Jaren pursues.

5. He Has A Signature Hashtag

Any time Jaren Lewison pusts a post on Instagram, he always uses the hashtag “rememberthefeeling”. He hasn’t explained why this is his hashtag or choice or what he means by it, but my guess is that it’s to remind people of the important of living in the moment. As his social media following increases, I wouldn’t be surprised if he took a few moments to explain why the hashtag is important to him.

6. He Has An Older Sister

Jaren comes from a relatively small family and only has one sibling, an older sister named Mikayla. She attended Oklahoma University where she was a part of the all-girls cheerleading squad and also joined a sorority.

7. He And Ben Are As Much Alike As They Are Different

When Jaren landed the role of Ben, he quickly realized that he developed a unique relationship with the character. While some actors play characters they fully identify with, and others play characters who are nothing like then, Jaren found himself in the middle. He told Vulture, “There’s some parts of Ben I can definitely relate to, and a lot of parts I did not experience in my personal life. I can relate to his vulnerable side. I’m very protective and loyal and into always being there for my friends, and you see that towards the end of the season with Ben. In terms of Ben’s academic pursuit of excellence, I also love school. ”

If you want to connect with Jaren on social media, you’re going to have to do it on Instagram because that’s the only platform he’s on at the moment. He currently has a following of just over 51,000 followers and that number will likely increase greatly in the next few months. Jaren isn’t the kind of person who posts every detail of his life on social media, but he is fairly active.

9. He Loves To Snowboard

No matter how much you love your job, breaks are always neccesary. When Jaren Lewison gets free time, he likes to spend it outdoors. He loves to get his blood pumping by hitting the slopes. He loves to go snow boarding and has taken several family trips to Colorado to enjoy the activity.

10. His Name Is A Combination Of His Parents’ Names

With a father named Jason and a mother named Lauren, it appears that Jaren’s name is a combination of both names. Although Jaren isn’t a very common name, it definitely has a nice ring to it and sometimes something as simple as a name can give you a leg up in Hollywood.