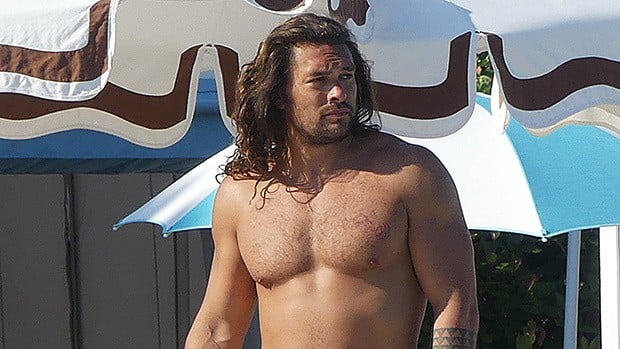 So let’s get this straight first and foremost, actors and actresses aren’t out to impress you unless they’re making a movie, but when the cameras are off and there’s no need to be super-ripped any longer they tend to look just like anyone else. Taking a look at Jason Momoa in his ‘dad body’ as some ridiculous fat-shamers would like to call it, one can’t help but laugh since a lot of us average to obese guys would kill to be in this kind of shape. It’s true that he’s not standing there ripped, oiled, and ready to kick some serious butt as he did in Game of Thrones or Aquaman, but if you think that they’re always ready with a bottle of oil and are constantly trying to look as though they’re chiseled out of stone then you might need a serious reality check. Jason Momoa has been a fan favorite for a while and for many people he’s been the epitome of manliness when he’s on screen or when he shows up for an award show as he did for Aquaman.

Obviously he was pumped for this and he was ripped for the movies and shows he’s been in, but this isn’t a 24/7 type of deal. As Olivia Petter of the Independent would agree with, eventually the ‘dad body’ does come back out when he’s on vacation and enjoying time with his family. If you think that stars stay ripped all the time then it might be time to actually do some research and discover that they do attempt to have lives outside of show business on occasion and those lives don’t include hitting the gym every single day for hours on end. When they’re not making movies a lot of stars don’t tend to stay in the gym for four to six hours or longer and they certainly don’t live out of a gym bag because they can’t walk away from their workout.

One has to wonder when the idea of not being able to go out and simply look like a normal person was considered to be taboo. Derrick Bryson Tayler from Page Six reminds us that Vin Diesel and a few other actors had to put up with this as well throughout the last several years as they’ve been seen on screen as ripped, shredded, and in such good shape that it would seem that they go around looking as though they’re cut from granite at all times. Some people might need to take a biology lesson to realize that the human body does tend to relax when not actively being stimulated. The stars aren’t about to look absolutely cut every moment of their lives, and quite honestly expecting them to do so is an attempt to put them on a pedestal that many of them can’t occupy every second of their lives, and many would never even bother to attempt.

It’s true that Momoa looks like an angry god when he’s donning the Aquaman suit and when he’s sitting high on his horse during Game of Thrones as Khal Drogo, but that’s his job, to look awesome and cut an imposing figure. He’s done this quite well in just about every movie he’s made, and in fact the only time he hasn’t seemed absolutely ripped are in movies like the little-known Braven in which he plays the role of a father and husband. Unlike some of his other movies Braven shows him in a much more natural light and doesn’t seem inclined to bestow upon him the same superhero status that he’s enjoyed in other movies, as he does get his butt kicked even as he’s dishing out the pain to those that are trying to harm him and his family. But looking at the picture above and then looking at how he appears when he’s in front of his audience, where he’s obviously going to look his best and put on a show, are two very different moments in the life of this star and as such are moments that are going to be treated in different ways. Expecting a star to bring their A game to every moment and facet of their lives isn’t just foolish, it’s an expectation that very few, if any, human beings can deliver on continuously.

Apart from that, the fact that he’s a family man makes it hard to believe that he’s going to spend his every waking hour at the gym. He keeps in shape, there’s no doubt of that, but thinking that he’s going to be pumping iron every moment of his life in order to never be taken off guard with his ‘dad body’ is a ridiculous notion that some people might actually think is feasible. In short, Jason Momoa is one of the more impressive actors out there as of now and he’s proven that he’s great when it comes to casting him for the big, brawny guy that can fill out a role. But he’s a human being too, meaning that he’s not going to fit the fantasy that some might keep in their heads at all times.