Home
Entertainment
Jason Statham is Apparently Not Who We Think, Says His Wife 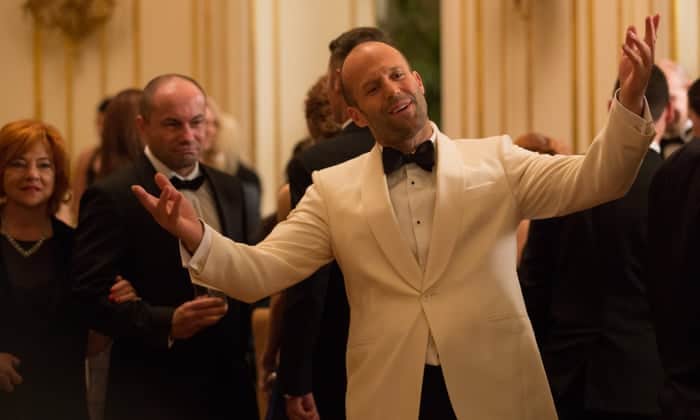 The idea that any actor is just like the persona they take on when acting is kind of a fallacy that a lot of people fall into and it’s also one that is a bit presumptuous since it assumes that actors aren’t all that great at their job since they simply get on camera and do what comes naturally. There are those actors who are every bit the type of person that they portray on screen, but Jason Statham isn’t one of them apparently, and it’s not too surprising really since when he loosens up on-screen he does give the appearance that he’s a far more humble and kind man than his characters would indicate. The word ‘duh’ comes to mind since it does feel as though more people should be able to realize rather than think that actors are who they portray and are that one-dimensional. There’s no way to get around the idea that Statham does play a very strong, alpha male character in a lot of his movies, but he has had a few roles that have shown him as something less than the butt-kicking type, such as Turkish in Snatch, or Bacon in Lock, Stock, and Two Smoking Barrels. In just about every other role he’s taken he’s been a man in need of redemption or a serious alpha male character that’s there to be as tough as he can be. But the person he is on screen is completely different than the role he plays off-screen, according to his wife.

According to Statham’s spouse, Rosie Huntington-Whiteley, Jason is a rather humble and kind-hearted, hardworking individual when he’s not playing the part of the big man on campus or the bad guy in one movie or another. A lot of this has to do with the fact that Statham didn’t get into acting until he was in his 30s, which means he missed out on a lot of the aspects of Hollywood that can shape a younger person as they continue to grow up in the business. Instead, he came up as average as anyone else, doing odd jobs and earning his way much as an average person might. The fact that he’s now a major Hollywood star doesn’t appear to have changed him according to Rosie, who was openly amazed after meeting him to find that he was one of the nicest people she’d ever met in her life. That’s high praise for anyone really no matter if you’re a celebrity or a run-of-the-mill citizen just trying to do your best with what you’ve got. It’s also interesting to learn that Statham is one of those that came to acting after learning what it was like to work most of his life since while many actors do know what it’s like to roll your sleeves up and really get to work, there are way too many that don’t know this experience or have decided to forget what it was like before they became famous.

Not all actors are spoiled divas that think life is unfair if they have to be quarantined in their luxurious ‘prisons’ as some would put it, but there are unfortunately those that make it too easy to target actors as those that might be hardworking individuals, to begin with, but become little more than spoiled, entitled brats once they become famous and fabulously wealthy. To hear that any of them still know what it’s like to value hard work and the riches that they continue to earn is uplifting in a big way, but there are bound to be plenty of skeptics that won’t take Rosie’s words at face value simply because they are words and as such, they’re difficult to corroborate without people seeing for themselves that Statham is in fact a good person. But to think that he’s every bit the alpha male type when he’s not on camera is kind of naive since that whole ‘all that is man’ attitude is kind of silly given that when describing someone as an alpha it’s hard not to laugh since a real alpha male these days isn’t what we see in the movies or at least not ALL that’s seen in the movies. The definition of an alpha male these days is a guy that sticks around, a guy that can be as responsible as he is tough, and can take care of a life far better than he can take one. The old school version of an alpha couldn’t hack it with a real alpha, largely because the old school alpha is something of a fantasy that paints a picture of a guy that every man wants to be like, every woman wants and is essentially a jerk to everyone they meet despite everyone thinking that he’s just a great person. Do you want to see an alpha male today? A father taking care of his kids with his wife, who he treats with respect and love, is a real alpha. Jason Statham is definitely an alpha on screen, but also in real life.