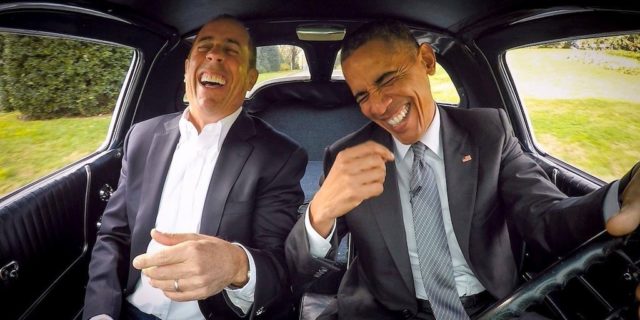 If you don’t know who Jerry Seinfeld is, you’ve probably been living in another country for the last twenty-five or thirty years. One of his most recent endeavors involves a show on Netflix called Comedians in Cars Getting Coffee. The show has been available for streaming since 2012, but now Seinfeld is finding himself in some literal hot water as he battles with a lawsuit brought on by producer Christian Charles.

The lawsuit stems from the claim that Charles is the one who created the show, not Seinfeld. According to Charles, he approached Seinfeld with the idea for this show sixteen years prior to its becoming a reality. He claims that Seinfeld wasn’t the least bit interested in the idea, and according to his comments, the idea for the show largely died right there.

Charles claims that the problems started back in 2011 when Seinfeld decided he did want to do the show after all. He says that at the time, Seinfeld contacted Charles, but the project didn’t move forward. He claims he filed the lawsuit because Seinfeld made the decision to go ahead and do the project without Charles. Furthermore, he is accusing Seinfeld of taking credit for creating the show when he claims that it was never his idea to begin with.

Of course, Seinfeld’s lawyers dispute this claim, saying that there is absolutely no truth to it whatsoever. Perhaps only time will tell who is really at fault here. However, Seinfeld has filed a countersuit against Charles, claiming that Charles had nothing to do with creating the show.

For the time being, it’s hard to tell who will ultimately be victorious here. Many people are curious as to why Charles waited for so many years to file the lawsuit in the first place. For many, that decision leaves them scratching their heads. There has even been some speculation that he waited until the show became very successful and then decided he wanted a cut of the profits. Whatever the reason might be, he has now filed it and in all likelihood, it will end up playing out in court, as neither party seems the least bit interested in settling this matter out of court.

As far as the show itself is concerned, it is still immensely popular. None of the drama that is playing out behind the scenes is likely to have an impact on its popularity. If anything, the increased media attention might even make the show more popular than it already is.

There’s no telling how long people will have to wait in order to see how all this eventually plays out. These types of things can drag out in court for years. Even after it is settled, fans may still not have a truly clear answer regarding who actually developed this show. For now, both parties are claiming that it belongs to them. Hopefully, the truth will come out at some point, but at the present time everyone is sticking to their version of events.