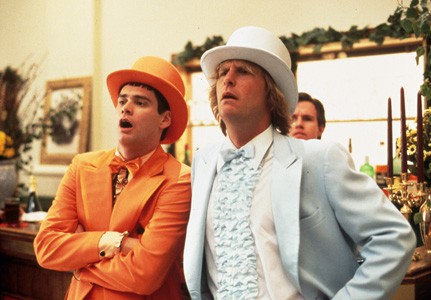 There was a very good and very simple reason why Jim Carrey fought so hard to bring Jeff Daniels into the Dumb and Dumber movie. He didn’t want another comedian trying to top him, he wanted an actor that was going to keep him on his toes, just as he would do to the actor in turn. Quite honestly Jeff Daniels is not a comedian. He can be funny, he can be a star in a comedic movie, but he’s not a comedian. And next to Jim Carrey he’s not even a novice. But if Dumb and Dumber would have starred two top-level comedians it probably would have been a continual back and forth attempt of the starring comedians to upstage one another and even try to stand out as the star. Jim didn’t want that, he wanted an actor that would play up to his part just as he would play up to that part.

And it worked obviously. Dumb and Dumber is perhaps one of the most ridiculous films ever made but it also falls under the category of being one of the most hilarious. The sequel was an understandable flop since a lot of us happened to have liked the way the original ended, with no one knowing just what was going to become of Harry and Lloyd. But the second one should have been axed almost immediately since it took the verve out of the whole idea to be honest. Dumb and Dumber was classic because despite the fact that buddy films had been seen before this was an attempt that made no excuses and didn’t bother explaining why the two leads were such dunderheaded morons. It just went along in a natural manner.

In fact the idea that Daniels essentially kept Carrey honest, and vice versa, is perhaps one of the only reasons why it worked so well. Somehow the two men had a chemistry with one another that worked so well that despite never having worked together before they were able to click in a way that made absolute sense and didn’t detract from the movie at all.

The funny thing is what Jeff Daniels mentions in the clip below. His scenes with Lauren Holly on the mountain during the skiing trip were all filmed ahead of time, with Carrey just hanging around the set and not working more than he possibly could. It was a kind of audition to see how Daniels could do and what he could bring to the movie. He had to wait for the call afterward to see if he even got the part and obviously things went well since we have the movie to look back on.

Perhaps the biggest challenge for Daniels was acting like a complete moron. Carrey really had no trouble since he’s always been a giant ball of manic energy that can be molded and shaped into whatever is needed for a role. But an actor that could bring himself to that level was something that was sorely needed for the film.

Thankfully Jim Carrey was pulling for him, since he did an awesome job.