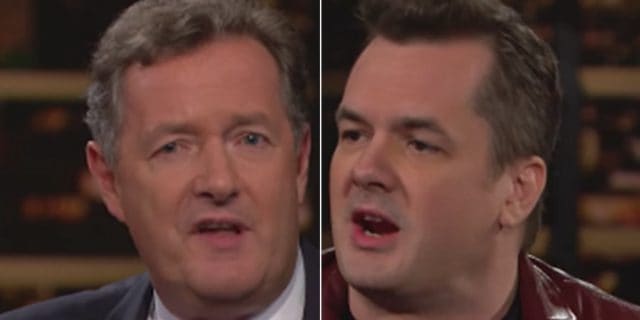 Things got a little heated on Real Time with Bill Maher last night.Â  So heated in fact that even Bill Maher was silent for the testy exchange.Â Â  The subject that was brought up was of course Donald Trump.Â Â  Australian comedian Jim Jefferies blasted Piers Morgan for championing President Donald Trump and needless to say it got a little uncomfortable.Â  Jefferies used explicit terms after the British TV personality took issue with Trump’s controversial travel ban being called “a Muslim ban.”

Piers Morgan responded by accusing Jefferies of overreacting and continuing to whip up hysteria.Â  But Jefferies didn’t let it go.Â  “This is what you do, Piers. You say, ‘He hasn’t done this, he hasn’t done that, he’s not going to do all these things.’ Give him a chance, mate. Hitler didn’t kill the Jews on the first day, he worked up to it, mate.”

Morgan responded to the verbal attack by calling it “ridiculous,”Â  and Jefferies responded by flipping him off and saying this: “You just like that you won ‘The Apprentice’ and you have a famous friend, mate. That’s all you like,” he added.

Only he didn’t say it so nicely as we’ve printed.Â  What was so significant about this is that even Bill Maher himself was silent during the exchange.Â  While Maher himself was calling Morgan ridiculous and telling Morgan that there’s no way that Hillary Clinton would have Trump’s cabinet let alone institute a Muslim ban, even he somewhat “restrained” Jefferies on the set.Â Â  I think we’d all agree that a Celebrity Deathmatch with Jefferies and Morgan is in order.

You can watch the full exchange below: