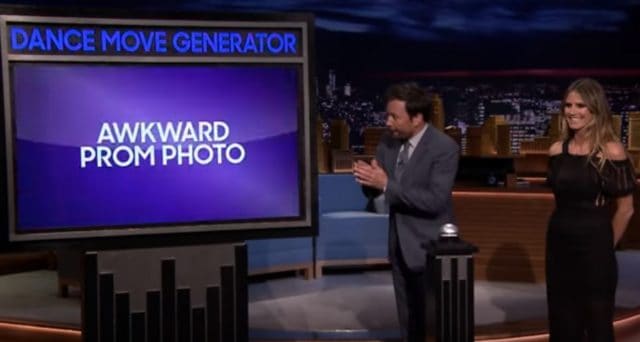 You don’t get to where Heidi Klum is by simply being a pretty face.Â  Obviously her modeling career got her off to an amazing start but there’s a reason Klum is so famous.Â  It’s because as beautiful as she is, she’s got the personality and charisma to match.Â  It’s why she’s been on television for over a decade and why viewers will continue to tune in.Â  Klum also has an incredible sense of humor as well as humility.

Klum took her hilarious self to Jimmy Fallon on The Tonight show as participated in an amazingly hilarious dance battle.Â  Klum herself said that she’s “very competitive” and it showed.Â  A dance move generator tasked each of them with improvising random choreography on the spot. “We’ll randomly select a never-before-seen dance move,” Fallon said. “Whoever’s turn it is has to make up a dance for that move. The best dancer wins.”

Here are the “never-before-seen” dance moves the two stars created: