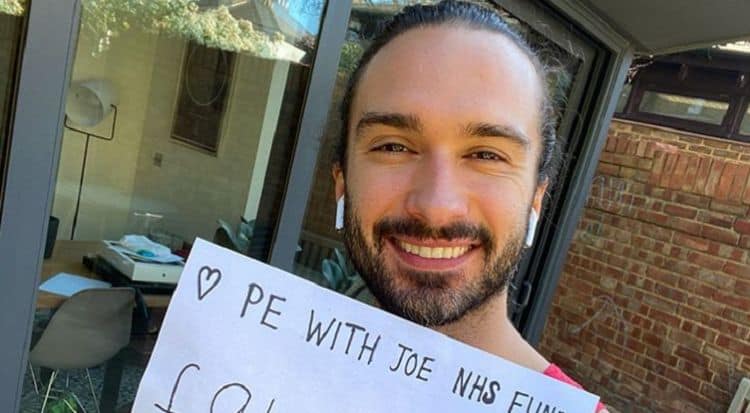 The COVID-19 pandemic has temporarily shut down industries all over the entire world. One of the industries that has been hit the hardest is health and fitness. In order to prevent the spread of the virus, almost all gyms have been asked to close. This has resulted in many fitness instructors and health coaches taking their business online. And Britain based fitness instructor, Joe Wicks is making the most of it. Joe has been posting daily workout videos and the Internet just can’t get enough. Keep reading for 10 things you didn’t know about Joe Wicks.

When Joe Wicks started streaming his work outs online, he was simply trying to make fitness more accessible to everyone who’s currently stuck in the house. He had no idea that it would eventually lead him to becoming a world record holder, but that’s exactly what happened. on March 24, 2020 set the record for “most viewers of a fitness workout live stream on YouTube”Â  with 955,185 views on his stream.

In the summer of 2019, Joe Wicks married his girlfriend, Rosie Jones. Ironically enough, Jones also broke a world record of her own. In 2009, she broke the record for “most bras taken off and put back on in one minute”. The couple now has two children together: a son and a daughter.

3.His Goal Is To Help As Many People As Possible

When it comes to his career, Joe’s intentions are as pure as they come. He genuinely wants to help people. Joe says he’s goal is to reach as many people as possible and encourage them to lead a healthier lifestyle.

4. His Father Struggled With Addiction

Joe may be rolling in dough now, but that wasn’t always the case. He came from humble beginnings and had to deal with a lot of unfavorable circumstances when he was a kid. Joe was born to a teen mom and his father struggled with addiction. Joe told The Daily Mail, “He had been a heroin addict from a very young age and I was exposed to the damage of that on a daily basis. Some of my friends had wonderful home lives, but they ended up doing drugs and going down that route. I never wanted to be like that. My dad’s example put me off drugs for life.” Thankfully, his father is now sober.

Lots of people’s parents discourage them from taking a non-traditional path. However, Joe’s parents have always been supportive of his dreams and interests. When Joe was growing up, his mother told him, “I don’t care if you become a dustman or a doctor, you can be who you want.” That message really resonated with him and allowed him to feel confident to pursue his career.

6. He Didn’t Grow Up Being Health Conscious

Joe Wicks is all about healthy living now, but he wasn’t raised that way. He didn’t grow up in a household where he was constantly eating a healthy diet or being encouraged to exercise. His mother always cooked lasagna and their cabinets were typically filled with junk food.

7. He Only Made An Instagram To Get More Customers

Like most small business owners, Joe Wicks was only planning on using Instagram as a way to market himself to potential customers. He never intended for it to be something he could monetize and he was pleasantly surprised when he started getting lots of attention.

8. He Likes To Spend Money On Vacations

As someone who wasn’t raised with a lot of money, Joe likes to be mindful about his spending. However, if there’s one thing he doesn’t mind splurging on, it’s a nice vacation so he can relax and enjoy time with his family.

9. He Loves Meeting His Fans

Although Joe Wicks is well-known, he says he’s still able to lead a ‘normal’ life for the most part. He’s still able to go through his usual routine and says that when fans do recognize him, they’re always respectful. Joe enjoys getting the chance to meet his fans and interact with them and he’s usually down for a quick picture.

10. He’s Never Struggled With His Weight

Many times, when people decide to seriously commit to a healthy lifestyle it’s because they’ve struggled with their weight in the past. However, Joe Wicks says that was never the case for him. He was always a very skinny person but says he found a special release in physical activity.