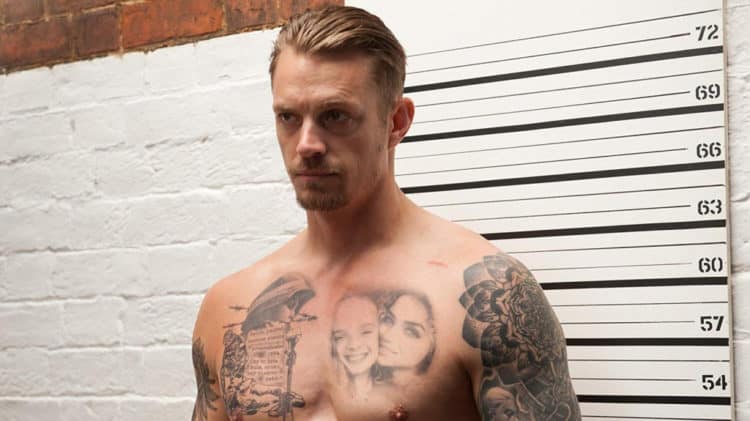 The first impression is that this actually looks like an impressive Joel Kinnaman movie since it’s dealing with a very real subject and doesn’t have him donning a robotic suit or trying to lead a group of psychotic villains. Second impressions might include the fact that he does look kind of tough when he’s placed in the right roles, which this could very well be. But playing the part of an informant is something that doesn’t appear to come with a lot of guarantees that one will be able to go home to their family at all times since the act of trying to corner a criminal that is essentially the big boss doesn’t appear to be that easy. Plus, when his handlers are all done with him it’s obvious that they’re going to ‘burn’ him, in other words, act like he doesn’t exist and let the system take care of him. One thing that should be clear after watching so many of these kinds of movies is an informant, aka a snitch, doesn’t last long on their own unless they have an extensive network of people that they can rely on. When everyone turns their back though, the world becomes a hard and very cruel place, and their families would be an obvious target since true, hardened criminals don’t really care about who they target and why.

The movie looks fairly realistic and this could be why it might be worth watching since the fact is that in the real world the idea that ‘snitches get stitches’ might not always apply, but it’s definitely something that people agree upon since no one likes those that are willing to turn anyone and everyone over to the authorities rather than go down for what they’ve done. When a person is an informant it’s a bit different, but a lot of criminals likely don’t see it that way since being turned in by someone that you thought was an ally or even a friend is bound to be a death sentence for the person that talked. There are likely to be a lot of elements of this story that will be created for cinematic effect and won’t be entirely realistic, but one thing that anyone should be able to learn through a quick Google search and possibly by reading books that have to do with the actual subject is that informant’s don’t have a long life expectancy unless they’re protected, and the US government and the various law enforcement agencies do have their own dark secrets that they might not want everyone to know about. The one thing about criminals is that a lot of people would see them as expendable depending on what they’ve done, and it’s not hard to think that a law enforcement agency would go to the trouble of keeping a person around only to ditch them later on when the heat becomes too great and the trouble to their agency is starting to mount. It’s easier to dump one person into the fryer than an entire precinct after all.

Where it feels as though the cinema does come in is when an FBI agent steps into the picture looking for a measure of vengeance for a colleague that was killed while undercover, and makes it necessary for the informant to be released and basically left in prison. You can imagine that a few people would react violently to such news since the idea of being left in prison when there was a chance that you would get out once the job was done only to find that you’re never getting out because you’re expendable would hit a lot of people like a ton of bricks. It’s bound to make for a good action movie though since it will show Kinnaman’s character on a path towards his family and hopefully towards a bit of payback against those that dumped him in prison and then left him there when their butts were on the line. One can only hope that Common’s character will figure out what’s going on and decide to help the main character in a way while trying to get back at those that killed his fellow agent. That’s how it might work out best at least if that’s the way things go, but until a person watches the movie it’s hard to say what’s going to happen.

It’s definitely something that a person could only hope doesn’t happen that often in real life since the horrific idea of being locked in prison when in reality you’re a free individual that’s attempting to do a job would be a nightmare, not to mention the fear that a person would have while thinking about their family and what they might be going through. This is definitely worth watching it looks like.