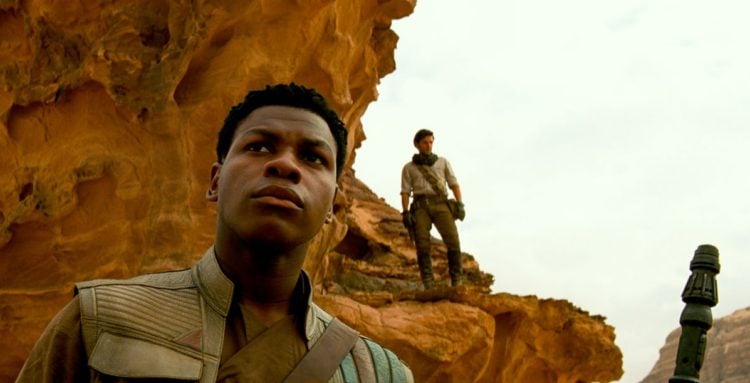 Some would say that John Boyega has a point when he calls out Star Wars and Disney over how his character was portrayed in the most recent Star Wars trilogy, and they would even point that much of Twitter has his back. That’s not as impressive as it sounds really, since anyone that speaks out in such a manner on Twitter is bound to see dozens to hundreds of people, perhaps even thousands, supporting them because they’re talking about an issue of race. The main reason that this is even pertinent at this point is that Boyega has an issue with how he and Kelly Marie Tran’s characters treated during the trilogy, as though they’d been pushed to the side and forgotten. That’s kind of funny really since it’s true that their characters were in effect sidelined for a good part of the movie, but it’s also apparent that he forgot that Rian Johnson’s attempt to create a Star Wars movie didn’t meet with a chorus of applause, but was critically panned and absolutely hated by fans. And no, it wasn’t just John and it wasn’t just Kelly, though she did receive a lot of hate that wasn’t necessary. It’s mostly because their characters weren’t the main characters and they never were. Finn was meant as a lead-in to the story, not much else, and he served to carry the story to the one whose narrative would carry it further.

It’s funny that John has such an issue with the movies now since he didn’t appear to have that much of an issue when it came to the paychecks or the fame that it brought him. In fact, the whole idea of complaining about being shoved to the side needs to be sidelined since the man that appeared in the Star Wars movies before Boyega was even a thought, Billy Dee Williams, was given a part in the original movies without being built up in such a way. And yet it’s likely that people will remember Lando for a lot longer than they’ll remember Finn. Want to know why? Lando was a supporting character. He was brought on as a name and a face that was meant to offer up a good deal of support and to be kind of flashy, but he was also an add-on, someone that was there to help make the movie look a little better. It wasn’t about inclusivity, it was about who could do the job the best and work with the movie, not act like a diva once they had to make way for their fellow actors to take the lead. Did I just call John Boyega a diva? Yes, I did, as he’s earned it.

Let’s break this down when it comes to how he was ‘sidelined’, shall we? He helped to open the movie, as he was seen as having a breakdown at the death of a fellow stormtrooper, something that wasn’t supposed to happen. He helped Poe to escape, he crash-landed on Jakku and lost track of Poe. He eventually found Rey and started running from the First Order. He and Rey eventually encountered Han Solo and Chewbacca, then they eventually made their way to Starkiller Base, where he, Han, and Chewbacca confronted Captain Phasma, Finn’s former commander, before dumping her down a garbage chute. In The Last Jedi he was given a lesser role, and yet he was still there, he was still a part of the movie, and he was still given a couple of very good scenes, but otherwise kept in the wings since it was Rey’s story at that point. Rose Tico’s story didn’t resonate with the audience, like it or not. There wasn’t enough rapport with her, and rapport with Finn was fading quickly since his acting in the first movie was decent but not so great that it defined the experience. But in TLJ he was given a final showdown with Captain Phasma that, admittedly, could have been better, but he and Rose were still given a side mission that focused on the two of them for a period of time. In fact, the two of them were even given a pretty powerful scene when they were trying to take the First Order head-on while trying to defend the rest of their companions. He was almost given a great sacrifice scene before Rose collided with him to keep Finn from wasting his life.

In Rise of Skywalker, he was once again a supporting character, but he was still more important than many others, including a couple of big names that have been around for much longer than he has. So really, what has he got to gripe about? Finn isn’t the best character in the franchise, and he’s not bound to be the most remembered, but as far as having contributed to the story, he was given quite a few chances, so Boyega kind of needs to simmer down a bit and count his money.