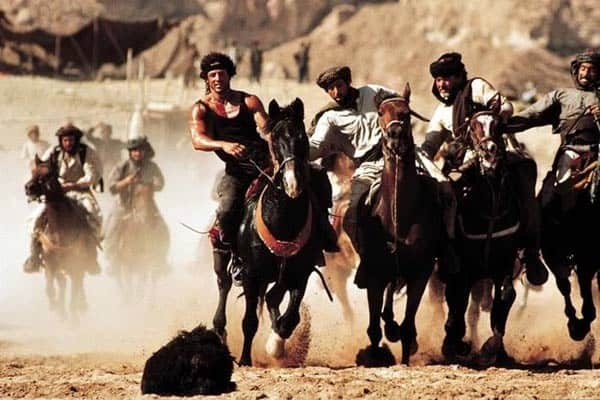 If past misdeeds were going to count against fictional characters then John Rambo would be likely be dubbed as a criminal and a traitor for having fought on the same side as Osama Bin Laden in Rambo III. Your eyes probably just bugged out of your skull when you read that didn’t they? How could Rambo, one of the USA’s biggest fictional heroes, possibly have fought on the same side as Osama Bin Laden? Well, put your eyes back in your head first and calm your breathing down just a bit and realize that before Al Qaeda and all the others that came along to cause the USA grief, the Mujahideen that Rambo fought with were opposing the Soviets that had invaded their land. The Soviets were the big bad in this film and more than that, they’d captured Trautman, Rambo’s mentor and commander, and been accused of the rape and murder of many within Afghanistan in the film.

So yes, Rambo was fighting alongside a group that would one day join with Al Qaeda and produce a man like Osama Bin Laden, who would become one of the USA’s worst nightmares. But back then that war had yet to kick off, and the allies of then would only become the enemies of tomorrow years after the film was made. But it was still enough after 9/11 that the dedication at the end of the film was changed. Instead of being dedicated to the brave Mujahideen people it was instead dedicated to the gallant people of Afghanistan. In other words, once they became the enemies of the US they were no longer allowed to have a film credit no matter if it was in a time when they were not a threat.

First of all, let’s remember that this was a fictional movie set in a time when the real threat had yet to be realized. Second, let’s recall that after 9/11, when the biggest threat to the USA seemed to be the Middle East, ISIS, or anyone that so much as sneezed in our direction, that our own paranoia hurt us worse than anything. Third and last, Bin Laden is gone, terminated, and unable to harm the USA any longer. The fervor this should be able to kick up needs to die down and quickly as it’s nothing more than an oddity to be noticed, not a rallying cry against anyone. It could however be why the last Rambo movie saw him charging into Burma to protect Americans that had been captured and tortured. That might have been a redemptive move on the part of those making the film to assure that his legacy wouldn’t be completely tarnished.

Also keep in mind that no matter his status as a war hero, an exile, or a recluse, Rambo eventually became more of a person for hire, someone that only did good things when he absolutely felt the need to do so. He didn’t believe in violence but he was good at it, and as far as having a cause went he wasn’t about to back down when there was a purpose to what he was doing.