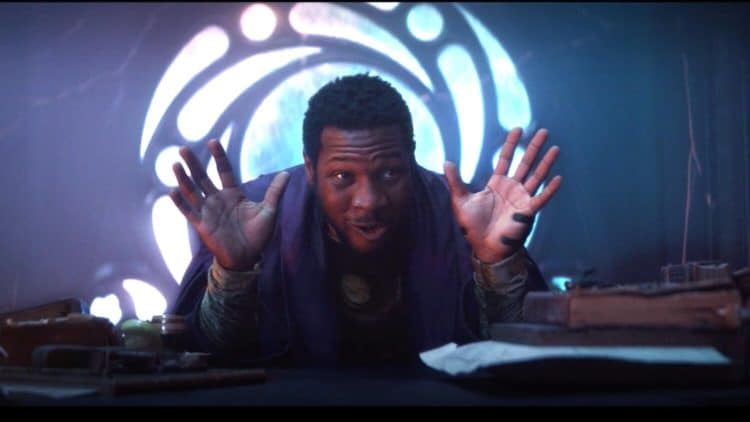 It’s likely that a lot of people knew to expect Jonathan Majors at some point in the Loki series since anything dealing with time was bound to bring certain characters out of the woodwork, and Kang the Conqueror is definitely one of them. Ever since Majors was cast in the next Ant-Man and Wasp movie it’s been well-known that his time as Kang was coming, but trying to predict when and where he was going to show up was bound to be a little difficult. Plus, the way he played the role in the finale of the Loki series was great enough that people now have to wonder what might come next since the benevolent version of He Who Remains is dead thanks to Sylvie, meaning that the other versions are free to do what they want, and it would appear that fracturing the timelines is their first order of business. This is made quite evident by the way the first season ends, as the Time Keepers are gone, and Kang has tipped his hand in being featured within the TVA in all his glory. Jonathan actually had this to say in this interview  via Geektyrant:

“The archetype of the wizard and what happens to him when he gets bored and becomes a trickster. I think when we meet He Who Remains he’s on the borderline of those two things. You don’t really know where he’s at and I think the ambiguity of that is one of the wicked things about it. He Who Remains has lived forever,” he added. “One of the great things I got to experience with our costume designer is that every piece we decided on was from a different place. The cape I had on was from the Victorian era. The shoes were from Genghis Khan. The pants from Mongolia, etc. You just mix and match it together and it informs the character. I think with He Who Remains, the objective for me was to give me the largest canvas possible. From that, as Kang begins to rear his head and do his deeds, in many ways, he has no choice but to be in opposition or be different from He Who Remains,” Majors elaborated. “That was the thing that grabbed me and pulled me into the role. Kang lives in so many iterations as He Who Remains says: ‘Reincarnation, baby.'”

In terms of being a big bad, Kang has usually been able to exist on his own, but he’s been known to team up and collaborate as well. In this current version, it doesn’t feel as though he’s ready to collaborate, but things could happen that might make this a necessity. It would be kind of nice to see Kang stick around for a while since his time-traveling technology would be a great way to build more and more conflict in the MCU, and it could be a way to shake things up even more than some might already be thinking about. When the time comes to see him again, no pun intended I swear, it feels that Majors is going to have Kang down even better since he’s already created a character that people liked in He Who Remans. But as of now, we have to wonder what Kang is going to be like since he’s already been described as a bit of a problem since he doesn’t like to share or play nice with others.

Out of all the villains that have come to the MCU over the years, there have been several that have been dangerous, a few that have been comical, and so far only a couple that has really had the ability to make threats that were anything other than boasts that could be taken down by one hero or a team. Thanos was one of them so far, and Kang is about to be another.