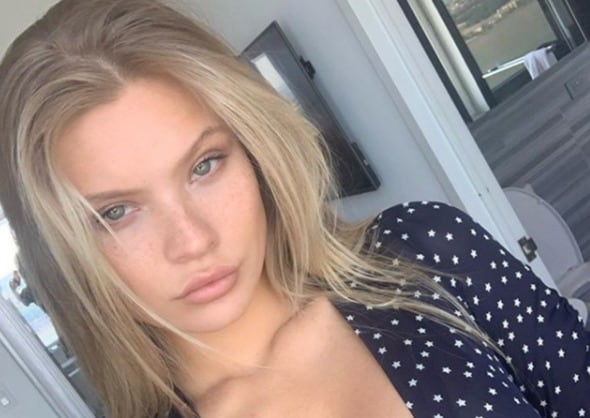 Modeling and acting in combination add up to a gold mine open for exploitation. Most celebrities follow these two lines of careers in the bid to make it to the top and to consequently remain there. Josie Canseco is one such celebrity who thrives in both acting and modeling in addition to being an internet sensation in the social media platforms. She comes from a family of celebrities with her dad being a retired major league baseball star while her mother is a successful model and actor. She draws her inspiration from her mother in whose steps she follows. Here follows a list of facts about this celebrity that you probably did not know.

According to Earn the Necklace, Josie Canseco was born on November 5th, 1996 in Weston, Florida. She is the daughter of the retired major league baseball outfielder, Jose Canseco, and Jessica Canseco. She is said to have grown up in Los Angeles, lived in Florida, but her modeling career pushed her to New York City. She began her modeling career back in 2016 after a famous photographer, Bryant Enslava, posted a photo of her and her friend posing at the Coachella. She turned heads, and modeling agencies have been on her heels since then.

2. Josie started her acting career at the age of 16

Some folks’ stars tend to shine early in life long before they have no idea what the hustles and bustles of life entail. Josie Canseco was lucky to ascend to stardom at a tender age courtesy of her mother’s popularity. She featured alongside her mother and father in the then much-publicized reality show, “Hollywood Exes.” Consequently, her career ship set sail and halted at the top. She later featured in “The Mother/Daughter Experiment: Celebrity Edition,” together with her mother.

3. She has featured in the Victoria’s Secret Fashion Show

Josie Canseco’s ambitions in modeling caused her to audition for a place in Victoria’s Secret Fashion Show back in 2017. However, she miserably failed having tripped on the audition stage after her high heels stuck in a carpet. Nonetheless, that was not the end of her cause. Determined to make her dreams come true, Josie returned for auditions a year later, and this time she passed. Consequently, she modeled in the show, which became one of her greatest achievements in her modeling career.

4. Her other notable projects in modeling

Apart from featuring in the Victoria’s Secret Fashion Show, Josie Canseco has also engaged in other high profile projects in modeling. Back when she was a teenager, Josie modeled for Kohl and Hollister and later on for Teen Vogue. She has also modeled for Aeropostale and Urban Outfitters. Josie Canseco was crowned the Playboy Playmate of the month in June 2016. Early this year, she graced the cover of the Elle Serbia April edition magazine flaunting a Heaven Please dress and Nike Air Max 720.

Models are often beautiful species that are a magnet for male attention. Josie Canseco is no exception and has had a share of the haggles of love life. According to Dreshare, Josie Canseco has been involved in romantic engagements with several celebrities that include Blue Smith, Justin Bieber, and Mike Francis Seander. However, her most notably open relationship was with rapper, Mike Stud. She has even featured in a number of his music videos in the past. The couple is said to be no longer together. Currently, Josie is alleged to be dating “Hills” star, Brody Jenner.

Having featured in several shows and commercials, Josie Canseco is a very popular figure in the world of celebrities. Appearing on the screen has given a lot of publicity amongst the reality show lovers and her modeling has also attracted the attention of the masses. According to Famous Birthdays, the star has done impressively well. Josie Canseco has been ranked at 9309 in the overall best models in America, 2nd in the category of those hailing from Florida and 5th amongst those with whom she shares her first name. Furthermore, Josie appears 27th in the chart of those with whom she shares her birth date and 13th amongst those in the same age group. These statistics tell of her competence in her career as well as how much people love her work.

Josie Canseco is highly involved in social media. Her modeling career extensively depends on social media to thrive. Consequently, she has very active accounts in different social media platforms such as Instagram and Twitter. She boasts of about 69.6 k followers on her Twitter account and another 493k on her Instagram account. She uses her social media accounts to sell her clients’ sponsored brands as well as popularize her shows. On her Instagram account, she has multiple pictures and video ads for her clients, including Coca Cola, Cameron Hammond, Fig Body Wear, and Galore amongst others.

8. Her hobbies and interests

Josie Canseco loves traveling and playing golf. Furthermore, her social media accounts reveal her love for a good swim, taking vacations, and ultimately modeling. Modeling doubles as her primary source of income as well as her hobby. Her favorite food is salad and fruit juice, her favorite color is black, and her vacation most preferred destination is Paris. Tom Cruise and Jennifer Aniston are her favorite actor and actress, respectively.

According to Earn the Necklace, Josie Canseco was arrested in 2015. She was driving while under the influence of drugs hence crashed into a curb. She tested positive for a drug test and was booked in accordingly. She was however released under a bail of $15,000.

Josie Canseco earns millions from her careers, both as a model and as an actor. She is paid handsomely by her sponsors whose brands she advertises as well as the shows in which she features. The star is estimated to be worth around $2 million as of 2019, more than her bankrupt father and $1 million less than her mother.