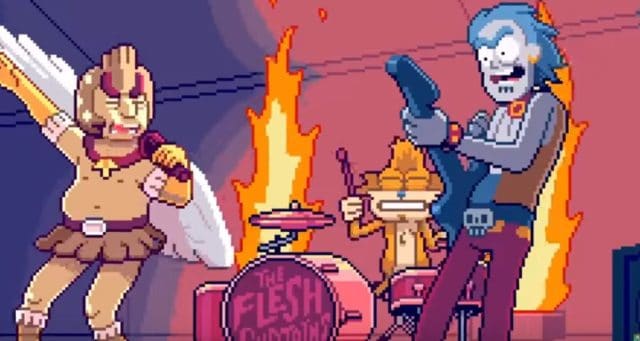 I’m sure all of these Rick and Morty pixel scenes would mean something to a fan but in all honesty they just seem crazier and crazier with a hint of familiarity thrown in as a tease. Why this cartoon is still one of the top favorites is still a mystery to me since it is like a big bundle of crazy mixed in with huge helping of psycho and blended until it comes out in a consistency almost like rocky road.

Yes, if you didn’t know it already Rick and Morty is not a favorite of this writer but in all honesty that doesn’t matter because it is a very popular cartoon still. Every now and again I can see flashes of greatness that might explain why it’s so popular with so many people. Then it descends into utter ridiculousness again and I’m left shaking my head wondering just what has become of cartoons and adult programming in the current era.

It’s amazing to think that the biggest controversy surrounding any cartoon used to be centered on the Simpsons, and then Family Guy, and for a brief period American Dad. But Rick and Morty have definitely stolen a lot of thunder from those shows and continue do so in a way that can only be described as a festive and crazed celebration that won’t pull a punch and will gladly ‘go there’ as it’s been so succinctly put in the past.

There are limits that they can’t cross obviously due to the FCC and what might be reported by enraged parents who for some reason allow their kids to watch this show, but those are few and far between it seems. In essence those limits are what might be deemed as beyond even the depraved morals of Rick and Morty.

I mean seriously, Rick turns himself into a pickle at one point and this is a major plot point that seems to drive a lot of the show for a brief period. He makes a habit out of killing rats by using an exoskeleton formed from rat parts. He’s like a psychotic, biological terminator with an evil genius mind. There aren’t a lot of shows that could possibly touch Rick and Morty right now for depravity and lunacy and that’s something I believe we should be glad about.

It’s not so much that those who watch are lunatics and psychos, not at all. It’s more to the point that Rick and Morty is like a continual car crash, for some perverse reason you just can’t look away unless you force yourself to. I’ve watched perhaps five minutes total out of all the clips I’ve ever seen and the images are already burned into my retinas so that I can’t unsee them. That’s what it seems to be like to watch Rick and Morty.

You can like the show or not, that’s your prerogative, but in all honesty it takes the ridiculous factor to a level that is hard to follow sometimes.