Home
Music
Are We All Just Pretending “Look What You Made Me Do” Doesn’t Remind Us of the Sixth Sense? 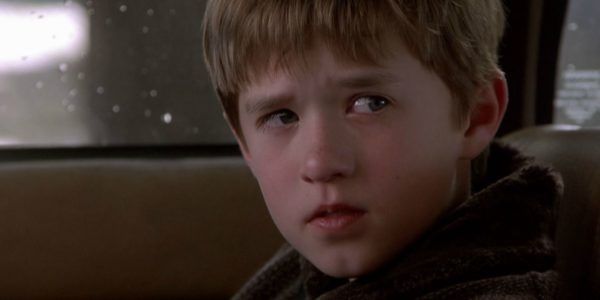 You don’t ever forget your first time watching The Sixth Sense. Either you guessed from the very beginning that Bruce Willis was dead, or you were shell-shocked at the final unveiling and spent the night crammed into a twin bed with both of your siblings, bodies pressed together in shared, sheer terror.

Just kidding on that last part. That definitely didn’t happen to us. Whether you were too-cool-for-ghoul or watching the cinematic treasure from behind a pillow fort, there were undoubtedly a few ghastly scenes that left you just a bit unnerved.

In case you were living under a rock in 1999, here’s a brief breakdown of that scene. Haley Joel Osmet (who’s rocking some killer facial hair now but still has those piercing baby blues) is asleep, and then hears someone in the kitchen. He groggily walks toward the light and sees his mom with her back to him, sawing furiously over the sink. He gets closer. We pull the blanket up. She turns around. It isn’t his mom. It’s a ghost woman who looks like his mom, with her arms slit up to the elbow. The blanket is fully over our heads now. Her scathing remark? “Look what you made me do.” She says that furiously, then shoves her bloody arms near his face.

We’d happily suppressed that memory for going on 18 years. We’ve graduated high school, gone to college, gotten married, and had kids. We thought we were in the clear and that scene would be forever forgotten in our psyche, along with that one where the kid asks Haley Joel if he wants to see where dad keeps his guns.

Imagine our surprise then, when Taylor Swift released the first single off her new album “Reputation” right before midnight on August 24. Like millions of others, we plugged in our earbuds, sat on the couch in the dark, and gave it a quick listen before heading to bed.

Innocent, right? After all, this is the girl who gave us “Teardrops on My Guitar” and “Today Was a Fairytale” with lyrics like “You’ve got a smile that takes me to another planet.” Pretty harmless, sugary pop fluff that we all love to hate on, but blast in our car when there’s no one around. So imagine our surprise when the song turns eerie and weird and in place of a chorus, there’s just this sinister chant:

“Look what you made me do.”

Nevermind that it’s in the beat of Right Said Fred’s “I’m Too Sexy.” All we hear is Sixth Sense suicide ghost and all we see is (bad) blood.

Why, Taylor? What was wrong with singing about how it’s a perfect night to dress up like hipsters? What happened to dating a Kennedy then buying a mansion in Cape Code and acting like it was Camelot?

Why’d you have to go and remind us of that scene from hell, when we were just trying to zone out a little before calling it a night?

So the real Taylor can’t come to the phone anymore because she’s dead? Don’t worry. We won’t be calling this number again for a while. Not in the dark, anyway.