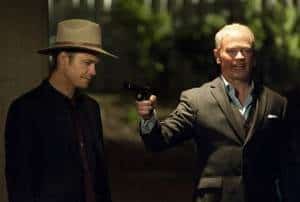 Justified‘s third season finale aired Tuesday night, providing a stellar ending to the show’s best year yet. Though it bore the carnage-promising title “Slaughterhouse,” the episode didn’t feature that much violence, save for one brutal scene forty-five minutes in. Instead, the episode’s big punch was emotional and character-driven, focusing on the relationships between fathers and sons.

Strained relationships between parents and children has always been a theme of Justified. Boyd’s father Bo (M.C. Gainey) tried to kill his son multiple times during the show’s first season. The show’s second season explored the difficult relationship between Mags Bennett (Margo Martindale) and her sons Dickie (Jeremy Davies) and Coover (Brad William Henke). The theme became even more pertinent in that season through Mags’ attempted adoption of (and genuine affection for) Loretta McCready, a young girl whose father she had Â murdered. While the echoes of Mags’ relationships with both Dickie and Loretta were felt this season, the theme of parenthood really became most pronounced this year with the introduction of new villain Robert Quarles (Neal McDonough), an unhinged Detroit mobster looking to earn his way back into the good graces of his father figure crime boss.

For the show’s third season, though, the theme wasn’t really hammered down until “Slaughterhouse,” which featured a major development in the ongoing strained relationship between Raylan (Timothy Olyphant) and his father Arlo (Raymond J. Barry). Though the relationship between the two was never strong, it was still a painful shock to Raylan to discover that his father had killed Trooper Tom Bergen while thinking that he was just a “man in a hat.” In essence, Arlo would have killed Raylan to protect Boyd, a revelation as ultimately heartbreaking as it is shocking. Arlo views Boyd as his son now, and while Arlo is probably going to prison for the rest of his life, this should only serve to drastically increase the tension between already-rivals Raylan and Boyd in the show’s upcoming fourth season.

This revelation really accentuates the similarities between two unlikely characters: Raylan and Quarles. The show’s hero and this season’s main villain are really two sides of the same coin: both are estranged from their criminal father figures. The difference between the two is that Quarles attempted to buy his way back into the father figure’s affections, an effort that resulted in the loss of both his (already fragile) sanity and his arm. (Speaking of which, how awesome was that scene? It’s always great when JustifiedÂ goes full-out crazy.) Raylan, in not trying to win over his father, ultimately retains his humanity, while Quarles loses his.

Speaking of losing humanity, Ava is slowly becoming a bad character. Her violent treatment of Ella May is making her resemble Delroy (William Mapother) more and more. Does being a pimp (or madam) take away your humanity? It seems likely that this will be something the show explores going forward.

Also going forward, we’ll likely see Johnny Crowder emerge as a more explicit villain, considering his secret deal with Limehouse to take down Boyd. But now Johnny has no friends — Boyd’s trust is sure to run out, and he’s no longer in league with Limehouse. Things certainly don’t seem to be going Johnny’s way, and he’ll likely be one of the focal points of the show’s fourth season.

Ultimately, Justified‘s third season went out just as satisfyingly as could be expected. With its third year besting even the brilliance of its second, things are looking bright for the show’s fourth year. Things are looking exciting. A