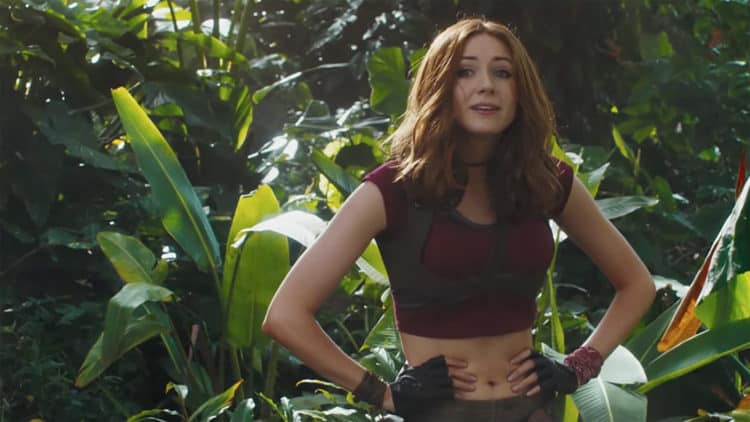 Well there’s no doubt that Steve Seigh of Joblo is ready to see Karen Gillan take over for Captain Jack Sparrow at this point, but there are a few things to be said about that before it becomes a reality, the first of which is that as Steve says, this is a RUMOR, not something cast in stone and signed in permanent ink just yet. The rumor does go however that the Pirates franchise is getting the reboot treatment eventually and that Gillan might be recruited to take on the lead character of a female pirate named Redd, which might be perfect for the fiery, redheaded Gillan as she wouldn’t have to do much in the way of hair color, unless of course those in charge wanted her hair to blaze red instead of remaining its normal hue. But in terms of accepting this or not if it did happen there are a lot of people already saying “yes please” to Gillan’s possible takeover, though there might still be some people that are on the fence for a number of reasons. One could be that Johnny Depp is bound to be a hard person to top or even contend with since the character of Jack Sparrow was what helped to set the entire Pirates franchise alight considering that when people thought of it they thought of Jack first and foremost.

To even come close to that level of enjoyment Karen would have to turn on the charm and bring the edge that she’s displayed as Nebula in the MCU, though with the more comical undertones of Ruby Roundhouse for certain. Keep in mind she doesn’t need to top Jack, that’s likely to be dang near impossible, but taking on a franchise such as the Pirates of the Caribbean and breathing new life into it is a huge responsibility not just for the fans, but for the story itself. Captain Jack made the Pirates franchise possible when it continued to move forward, as he’s one of the few elements that absolutely could not be removed without destroying the whole thing in the process. That’s kind of what the next person in line would have to be since the story does incorporate a lot of moving parts and does place importance on just about everyone that’s involved in it, but at the same time that central character has to be someone that people are going to look to and expect to carry it along. There’s no issue with her being a female lead, and there’s no problem thinking that she could do it, but the proof is in the pudding as the saying goes, and until Karen really makes that leap people are going to say they’re ready to see it, but there will still be that nagging doubt deep down inside that this next effort will be worth their time. Luke Parker of We Got This Covered has more to say on the subject.

Think of it this way, the last couple Pirates movies really weren’t the same caliber as the first three, as On Stranger Tides and Dead Men Tell No Tales felt like they were all over the place, and the last movie really feels as though it ended any chance of the allure that the Pirates movies could hold considering that breaking a symbol that abolishes all curses at sea leaves a lot of questions. What happens now if another curse is laid, or can another curse be laid upon anyone? At that point it almost feels as though any magic left in the seafaring adventure would be gone for good. Thanks to creative writing there are ways to bring it back, but so much care has to be taken to make it so that the room for error is next to none. Bringing Karen Gillan in as a female lead could be a great idea, so long as she’s given the kind of edge she needs in both a comedic and dramatic sense, meaning a sort of female Jack Sparrow character that is her own unique self and has the strength of character needed to take on such a role. Think back to Pirates of the Caribbean: The Curse of the Black Pearl, and remember the scene of Jack sailing into Port Royal. The proud yet nearly penniless captain, riding a sinking ship into the bay, his eyes set upon the near horizon, and none of us knowing until we saw just how dire his situation really was.

That’s the kind of edge that Karen needs, something all her own but also something that is the resolute, unyielding mien of someone that has seen tough times in their life, whether by their own making or just ill luck. Can she do it? Probably, but the idea of throwing her to the fans and hoping that she’ll pull something off isn’t a reality yet, as remember, this is just a rumor. Jon Fuge of MovieWeb had more to add to the topic.