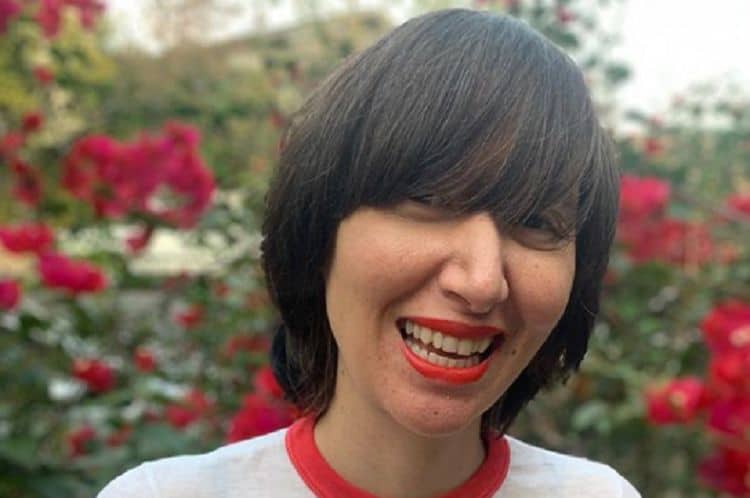 If you don’t recognize Karen O by name, you may know her better as the lead singer of the indie rock band the Yeah Yeah Yeahs. The group rose to mainstream popularity during the early 2000s with the success if their hit single “Maps”. What some people may not realize, however, is that Karen’s contribution to music goes far behind one hit single. She has worked hard as a band member and a solo artist and she has build a solid catalog of incredible songs. Her creativity and natural talent have proven to be an incredible combination and two major components of her success. Continue reading for 10 things you didn’t know about Karen O.

1. Her Tears In The “Maps” Video Were Real

“Maps” is a pretty sad song, and the video also has the same vibe. During the video, Karen shed some tears while singing the song’s famous lyrics “they don’t love you like I love you”. Viewers probably figured that crying was all part of the act for the video, but Karen was actually crying real tears. Karen said, “My boyfriend at the time was supposed to come to the shoot – he was three hours late and I was just about to leave for tour. I didn’t think he was even going to come and this was the song that was written for him. He eventually showed up and I got myself in a real emotional state.”

2. She Studied At NYU

After enrolling at Oberlin College after high school, Karen decided she wanted to be back closer to home. She transferred to New York University where she studied film at the well-known Tisch School of the Arts. It’s unclear whether or not Karen actually earned a bachelor’s degree from the university.

3. She Was Very Self Destructive During The Yeah Yeah Yeahs Early Days

Of course every artist wants to achieve success, but going from being an unknown person to a celebrity can be a challenge for lots of people and Karen was no exception. Karen told The Guardian “The early days of Yeah, Yeah, Yeahs were a self-destructive period of my life. I did some ridiculous, masochistic stuff up on stage, like rolling around on broken glass and getting blind drunk. But it was highly cathartic, too. I was subconsciously coping with the attention and the hype, which I wasn’t prepared for. When I fell headfirst off the stage I realised I had to rethink my whole stage thing.”

4. She Was Born In South Korea

Karen comes from a very diverse background; her mother is Korean and her father is Polish-American. Her parents met on a bus while her father was in South Korea teaching English. Karen was born and South Korea, but the family eventually relocated to the United States and she was primarily raised in New Jersey.

To the world, Karen may be a big rock star who has performed all over the world, but at home she is simply a wife and a mother. Karen and her husband, Barnaby Clay have been married since 2011. In 2015, they welcomed their first and only child together, a son named Django.

6. She Thinks Of Music As Her Religion

Religion is something that holds a sacred place in many people’s hearts. Their belief in a higher power is what guides them and keeps them on track when things in life get rough. For Karen, however, that higher power is music and she told Rolling Stone that music has always been like religion for her.

7. She Thinks It’s Cool That Beyonce Sang A Reimagined Version Of “Maps”

Beyonce’s 2016 song “Hold Up” began with some words that were probably already very familiar to lost of listeners: “hold up, they don’t love you like I love you.” The song’s chorus, an intentional nod to the Yeah Yeah Yeah’s “Maps” was catchy and fun, and Karen couldn’t have been more excited about it. She is grateful that “Maps” has been able to stand the test of time and touch so many people since its release.

8. She Was Sad When Hillary Clinton Didn’t Win The 2016 Presidential Election

Karen isn’t afraid to talk about her political beliefs, and she also isn’t afraid to admit that she was incredibly sad in 2016 when Hillary Clinton lost the presidential election. Needless to say, she has made it very clear in 2020 that she will be voting for Joe Biden.

9. She Was Featured On The Soundtrack For Where The Wild Things Are

Karen O has accomplished lots of cool things throughout her career, but in the eyes of her five-year-old son, the coolest thing is probably that she composed the music for the Where The Wild Things Are soundtrack. The song “All Is Love” from the soundtrack was nominated for a Grammy Award for Best Song Written for a Motion Picture, Television or Other Visual Media.

Musical talents aren’t the only ones Karen possesses. She is also a visual artist who has put her NYU filmmaking skills to good use. During her career, she has directed music videos under the names Marshmellow and Kids with Canes. The second moniker also includes her husband.