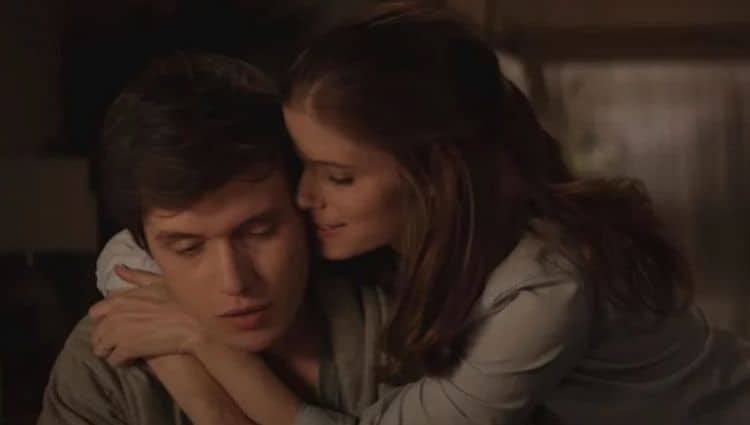 There’s just so much wrong that goes into the idea of A Teacher on Hulu that one has to wonder just where to start when describing it. Some folks might want to say ‘calm down, it’s only fiction’ and they’re right without any doubt, but the idea is still pretty abhorrent since thanks to past indiscretions by those that appear unable to do anything about their desires and passions we’ve seen teachers and students engage in highly questionable if not illegal relationships. To many, it’s simply wrong, without reservation, and they’re right to say so since the story is describing the relationship between a young man and a grown woman that ought to know better, and in fact, they should both know better since the teacher is married as well.

Kate Mara and Nick Robinson will be leading this series when it arrives on Hulu this coming November. It’s a sure bet that some folks will be wondering just why our society feels the need to push certain stories when it’s bound to upset quite a few people, but the answer is pretty simple. People want to see the drama, they want to witness the story that their favorite actors can tell, and for one reason or another, people want to see the utter ruination of a life in a manner that’s absolutely disturbing. That’s being a little melodramatic of course, but the whole thing appears to be a bit off since it does confirm that entertainment has a much wider scope than is needed at times since people enjoy watching some of the strange subjects play out on the big and small screens.

This is where I stop and admit to being a hypocrite since such stories are in fact quite popular and there are plenty of others that are every bit as messed up but are still seen as valuable in one way or another since they depict how life is, was, or could have been had people made different choices. A teacher falling for a student though is sadly nothing new, and vice versa, since it’s happened in the past and it’s been just as sickening to many people then as it likely is now. The only difference is that now there might be people willing to stand up for this type of relationship, no matter that it’s still illegal in many ways and absolutely immoral. The fact is that for one reason or another students and their teachers at times feel a type of attraction for each other that’s hard to reason with and can become something that can ruin not just one life, but several. There are a few different cases that have happened throughout the years that have been documented and made into big cases since the teachers are expected to know better, and are also expected to cut something like this off before it can ever start since they’re the adult, the responsible party, and this is why they’re typically the ones held responsible. And yet Hollywood thinks it’s a great idea to keep making movies and TV shows about the issue, no matter that entertainment does in fact encompass every aspect of life that we tend to see and hear about.

Perhaps the one reason that this is such a poor idea sometimes is that it has been used in a different way in the past, though out of all of us I will say that the comedic movie made by Adam Sandler, That’s My Boy, was kind of funny despite the fact that it was almost virtually ignored by many people. The main character, played by Sandler, rose to fame from entering into a highly illegal relationship with his teacher, who became pregnant by her much younger student and in a sense made him the celebrity he became. It was a comedy that kind of failed to hit on all cylinders, as several of Sandler’s movies have over the years, but it also touched upon the subject of teacher/student relationships in a way that might have soured it from the start. It does sound as though I’m trying to justify the inclusion of such a subject while condemning it at the same time, but to be quite honest the laughter that’s derived from the situation in That’s My Boy was a bit of a lame attempt to cash in on the craziness that comes with such a student/teacher relationship, and it didn’t pay off. But the reality of it is that in the entertainment field, this is still a touchy subject since in real life this is the type of thing that ruins people without reprieve, as those that have experienced it first hand have never been looked at the same following the incident. Hopefully, Hulu knows what they’re doing when it comes to releasing this series.