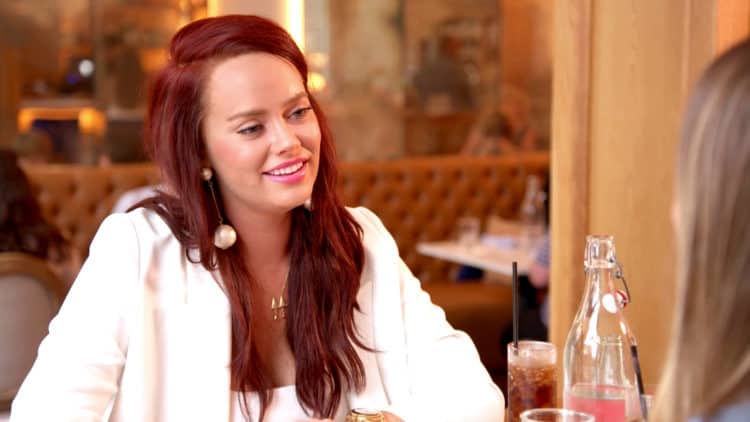 Don’t know who Kathryn Dennis is? Well you might want to look her up a bit and figure it out since she does have a rather interesting political background as far as who she’s related to. Plus she is a reality TV star that a lot of people might spring to defend when it comes to her reputation. But apart from that if you really don’t know who she is you might want to check it out on Google just to see what you may or may not be missing.

Here are a few things about Kathryn you might not have known.

10. It’s not too surprising that she has a pretty healthy following on social media.

Drama, controversy, and more drama is what sells these days since a lot of people are drawn to it the way flies are drawn to….well, you know. No one’s saying she’s not talented in some way, but quite honestly her social media following is something that’s definitely built on her looks and the acting she does on her reality show.

9. In case you were wondering what she does, she’s a model, writer, and TV personality.

Trying to keep track of every person that’s supposedly famous or deserves the big time acclaim that they want is kind of hard these days and has been for a while now since reality TV opened up the floodgates and let just about every other person in what wanted to be seen by the public.

Some people might think that’s kind of low but others would actually claim it’s kind of high since really, beyond her reality show there doesn’t seem to be a lot in her career that is worth talking about and if you don’t know her by now then the show isn’t doing it’s job. John Wolfe of the CheatSheet puts it a little higher, but really there’s not much justification.

7. She seems to have a very inflated sense of self.

Whether it’s the show or her own personality that comes out at times she seems to have a very high opinion of herself, and to be honest she’s a star of a REALITY SHOW, not a movie star, not anything else that merits that kind of attention. But hey, at least she has confidence.

6. Her ex has actually gotten a court order to prove her sobriety.

There have been claims that the constant sobriety tests are a form of abuse and that could be right, but when kids are involved and her ex wants to be sure that she’s on the wagon there’s really no way to be safe enough when she’s already been seen to have an issue with drugs an alcohol.

5. There’s a lot of drama that goes on between her and a few of the people in her life.

Being that she’s on a reality show this should be a big ‘duh’ moment since these kind of shows are built around drama and little else. The whole idea that her life is as dramatic as it can be and is prone to pulling people into the madness is something that’s just par for the course.

4. She’s been suffering from depression for years it seems.

Honestly depression is nothing to make light of but when people suddenly ‘come out’ about their depression, especially on live TV, it seems a bit suspect since if it’s not to be made fun of then announcing it on a TV show seems like one of the worst platforms to use when speaking about it.

3. Her feud with Ashley Jacobs is kind of amusing in a way.

Gillian Walters from Nicki Swift gives a serious account of how the feud started and what’s been going on and it might sound disrespectful in a way, but it’s also kind of funny since the tit for tat,Â  back and forth war that’s been going on between the two women is something you’d expect high school kids to do, not grown adults that know how to reason and discuss matters with one another. But there’s always the belief that the feud is being sustained for ratings.

2. She’s been regarded as a party-girl in the past.

It sounds as though Kathryn has been the type to simply enjoy when she had the chance for a long time. While there’s nothing outwardly wrong with that the party has to end eventually when one gets older and has a family.

1. She actually lost custody of her kids over drug charges and a failed sobriety test.

Some folks almost seem to see this as a surprise that any woman would lose their children when they’re a big star and can pay for rehab and perhaps come out looking all sparkly and new. But thankfully her ex wasn’t messing around when it came to their kids and took sole custody until she could clean up.

It’s kind a hope that what’s seen on the show isn’t the real her.