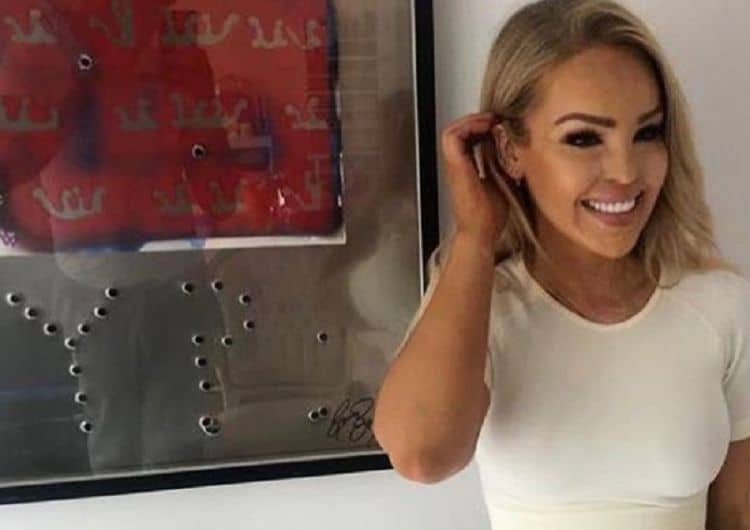 Prior to 2008, Katie Piper was an up-and-coming model making her mark in beauty pageants, modelling contests, and on the pages of men’s magazines such as Maxim. She was also developing a promising career in media, working as a digital television presenter on web-based TV shows and digital channels. In March 2008, Piper was contacted by Daniel Lynch (a martial arts enthusiast who’d developed an interest in Piper’s activities) through Facebook. Piper agreed to meet up with Lynch, and the pair started dating soon after. After a promising start, the relationship took a terrible turn when just 2 weeks after their first meeting, Lynch violently assaulted, raped and stabbed Piper in a frenzied attack. Despite seeking medical assistance, Piper choose to withhold details of her attacker out of fear of reprisal. Two days after the first attack, Lynch struck again, this time with the aid of an accomplice, Stefan Sylvester. In what was one of the worst acid attacks to occur in the UK, Sylvester threw sulfuric acid at Piper’s face, leaving her blind in one eye and with severe burns. Since the attack, Piper has proved an inspirational figure to many, raising awareness of the plight of burn victims, building a successful career in the media and proving the power of human endurance. To find out more, keep reading.

1. She underwent 40 treatments for her injuries

Following the attack in 2008, Piper was treated at the Chelsea and Westminster hospital. Due to the severity of her injuries, surgeons were forced to completely remove the skin from Piper’s face and replace it with a skin substitute in readiness for a skin graft. As part of the treatment, Piper was placed in an induced coma for 12 days, wore a plastic face mask for 23 hours a day, an underwent a total of 40 surgical procedures.

2. She wanted to die after the attack

In an interview with the Daily Mirror, Piper revealed that in the aftermath of the attack, she asked her mother to kill her. After seeing her face for the first time, Piper said “I thought, ‘someone’s going to have to hand me another mirror because this one is totally broken. Then I realized it was me. I wanted to smack it in my face and cut my face open and tear the whole thing off.” Devastated by what she saw, Piper, who at that point could only communicate in writing, told her mother: “Kill me”. However, Piper soon found her inner strength and stared to move on from the attack.

3. She chose to waive her right to anonymity

Because of the sexual nature of the first assault, Piper could have chosen to stay anonymous. Instead, she chose to put her name and her face in full view to raise awareness for the plight of burn victims. One of her first public endeavors was the TV documentary, Katie: My Beautiful Face, which, thanks to it significant viewership, managed to accomplish exactly what Piper had set out to do.

In October 2013, Piper broke the happy news she was expecting her first child. After the usual 9 months, Piper and her partner, Richard Sutton, welcomed daughter Belle Elizabeth into the family. 3 years later, the family grew again with the birth of their 2nd daughter, Penelope Diane.

5. She’s launched her own foundation

In 2009, Piper launched her charity, the Katie Piper Foundation. The foundation aims to improve the outcome for burns victims by delivering burns rehabilitation, supporting victims through their recovery, and raising awareness of their plight. Since its inception, the foundation has raised millions in donations through various appeals and fundraisers (such as sponsored runs and cycle challenges), much of which has been plowed into its dedicated rehabilitation center for burns survivors.

7. She’s a brand ambassador for Swarovski

In 2018, Piper joined “The Great British Bake Off” champion Nadiya Hussain and Kris Hallenga, founder of the breast cancer awareness charity, CoppaFeel, to become part of a new line-up of brand ambassadors for Swarovski. Piper joined the brand as part of their ‘Stories of Yes’ initiative, a campaign that aimed to encourage female empowerment.

Piper published her first book, an autobiography entitled “Beautiful”, in 2011. She’s subsequently gone on to write several more, including the self- help guide, “Things Get Better: If You Believe Then You Will Survive”, a collection of quotes and mantras, “Start Your Day with Katie”, and the June 2019 offering, “Things I’d Tell My Child.”

Thanks to her numerous TV appearances and campaigning efforts, Piper has won a litany of awards, honors and distinctions. In October 2010, Piper was awarded both the ‘Courage Award’ at the Pride of Andover Awards and the ‘Most Inspirational’ award at the Inspiration Awards for Women. 2010 also saw her claim the “Women to Watch: Inspiration” award at Red magazine’s “Red’s Hot Women Awards”. In 2011, she was awarded the Sainsbury’s Women of the Year “You Can” Award at the Women of the Year Awards, and the award for “Best Documentary Programme” for Katie: My Beautiful Face at the Broadcast Awards.

10. She appeared on Strictly Come Dancing

In 2018, Piper put on her dancing shoes to join the line- up of celebrities on the BBC dance competition, Strictly Come Dancing. Unfortunately, Piper proved less of a talent on the dance floor than she has in other arenas and was eliminated from the show in the third round. Nonetheless, the show proved a great experience, as she shared with The Independent. “I have taken a lot from this experience and it has all been really positive, and I’ll never forget this journey,” she said. “There are some brilliant dancers in this competition and sadly I don’t think I was one of them. But I have had a great experience you know and I feel really privileged to have been here.”