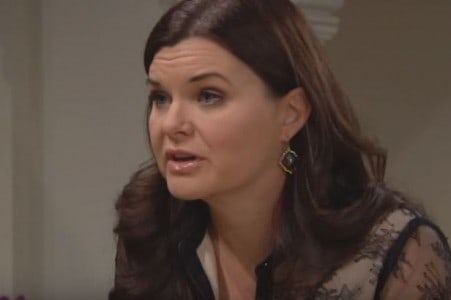 Friday on the Bold and the Beautiful, we saw some serious anger in some very bold ways. Brooke is shocked when Katie shows up at her house with a contract that’s been voided out and nulled and hands it to her. She is further shocked when she hears all that her sister has to say to her. Katie tells her that she ruins everything and everyone she comes into contact with and she goes for a low blow when she brings up the fact that Stephanie had to keep Brooke away from her family, too. Brooke is devastated and shocked at the things her sister is saying to her, but she keeps quiet and only tries to apologize and make things right with her sister. She is not having any of it, though, and she really doesn’t want to hear with Brooke has to say. Brooke is in love with her husband and she believes she is trying to steal her husband, which means she wants nothing to do with hearing what her sister has to say.

In short, Katie bans her sister from her business, her husband, her son and her life. She wants her to pack up and go and never come back. She makes it clear under no uncertain terms that she is to get lost and never come back. There is no hope in Katie’s mind that they will ever be able to fix their relationship, and she will never forgive her sister for what she’s done to her. As far as Bill is concerned, Eric knows better than to believe that Brooke is the only one with feelings. He makes it clear to Bill that he needs to fix this problem and he needs to fix it now before Katie ruins this relationship with her sister forever. Bill is not all that pleased that he is accused of having feelings for Brooke, but everyone that watches this show knows he does so he is only trying to hide it as far as everyone else is concerned. 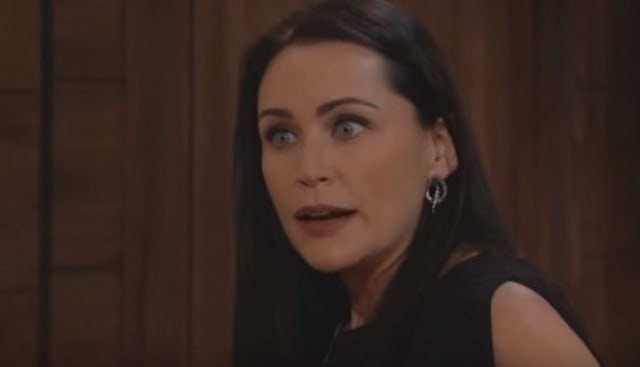 In other love triangle news, we see a bit more of Wyatt and Steffy kissing. She seems to not want to kiss him as she continues to think of Liam, but Wyatt is insistent that she has to let him go and asks her to focus on him. He seems to not care where her mind is as long as her lips are on his, but her mind is most certainly not on Wyatt as she kisses him and dreams of Liam. Wyatt worked really hard to convince Steffy to take the motorcycle he got for her on a ride, and she does. He is a bit disappointed when she tells him that she needs to do it on her own and leaves him behind. However, the drive up the PCH makes her feel good and she returns to the beach house where they do a bit more kissing. She has no idea that everything Wyatt is doing to her is carefully calculated and masterminded by him to get her to forget Liam and fall for her. Here’s hoping she sees past his advances before it is too late.

As far as Liam, he simply has no memories. He has so few memories of his life at this point that he thinks Quinn is a friend. He compliments here, tells her she is beautiful and tells her she has kind eyes. She’s not sure what to think other than to feel relief that he has no idea what is going on. She helps him eat and she is a bit shocked when he kisses her cheek. He seems completely unaware of anything, but we have to say we would not be shocked if this was all an act so that he can butter her up and get away. After all, if he remembered that Quinn kicked him, threatened him and clearly kidnapped him, he might worry that she is worried and will do something awful to cover up her mess. If he pretends not to remember any of it, he probably has a much better chance of survival. Of course, he might have actual amnesia considering he does have a head injury.