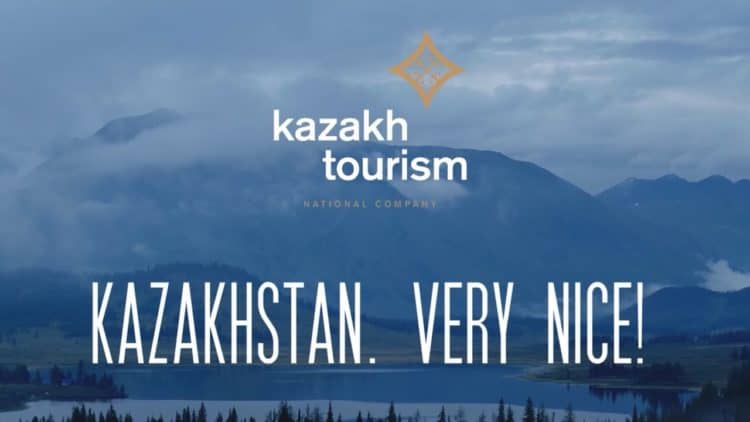 There’s no need to even ask why Kazakhstan is adopting the ‘Very nice!’ slogan that was brought about by Borat, especially since the country, which at one point was ready to crucify Sacha Baron Cohen, is now pulling back that idea since the movies have apparently left them with a reason to smile since overall, the Borat movies have done far better than some might have thought and the idea of a second one is getting more people to hop on board with the idea. One could easily say that Borat is one of the more confusing comedies that’s come along in a while, and the reasoning behind making a second one appears to be that Cohen really just likes to unnerve people and get them to react, but of course many others would say there’s something deeper than that. Stating that there’s something deeper to Borat is like saying there’s another reason why a shark that smells blood in the water is bound to flash their teeth in expectation of a meal. Kazakhstan is definitely enjoying the tourism that has been coming in even if the movie Borat was not filmed in the country. The mere mention of Kazakhstan was enough to get a lot of people who enjoyed the movie on board with thinking that the country was in fact a great place to visit and possibly to pick up a bit of history from wherever Borat had been filmed. If you’re rolling your eyes right now don’t worry too much, you’re not the only one.

The influence that movies have on the real world and the audience that lives in the real world is pretty obvious. Think of it this way, some people still think that the Goonies could travel from Astoria to Cannon Beach on their bikes, and this is largely because people don’t realize the geography that’s involved and how much distance lies between them. The same can be said of Kazakhstan, a lot of people know nothing about it, but they heard it mentioned in a movie so they believed what they were hearing and seeing. It’s not hard to fool an audience sometimes, especially if many of them don’t want to crack open a book or perform a simple Google search to see what’s accurate and what’s not. But the fact that the country is now taking on the slogan from the very movie that many of those in the country learned to hate is enough to make a person shake their head and move along while wondering how in the world it happened.

At least the slogan isn’t wrong, since if someone does manage to search on the web for Kazakhstan they’ll see that it is a rather attractive country and has plenty of places to see and things to experience. That’s about the only reason that the country should feel any gratitude towards Borat since the movie did turn people on to the country in a bigger way than might have happened normally. Some countries are simply more attractive than others because they’re well-known, while others are virtually ignored since people don’t know that much about them. The more we know, the more we discover that it is a beautiful world and that there are plenty of places that are worth going to in order to see the grandeur that they have to offer. Going to Kazakhstan just because of Borat probably wouldn’t be the best idea, but going because it could be an interesting trip would be a great idea. Obviously, this isn’t bound to happen in great numbers at this point since the pandemic is still keeping a lot of people grounded and flights to and from other countries are still bound to be limited since no one wants to see another run of COVID-19 spring up and continue its rampage around the globe. But whenever things do finally calm down, perhaps tourism in Kazakhstan can experience an upswing since the country is opening itself up with ads like this and it is embracing something that people happen to care about, for whatever reason.

Borat is definitely a hard comedy to get into, but many people have embraced the movies and have even gone so far as to call Cohen a comedic genius. Some would say that real genius is often reviled and not fully appreciated, as has happened with many individuals throughout the years. But it does make some people wonder if there’s a line that needs to be drawn eventually, no matter how arbitrary it might be. With comedy, it’s hard to say that such a line should exist since it would be hypocritical at the very least. But perhaps caution should be the best advice at times if only to make certain that one doesn’t end up alienating TOO many people.