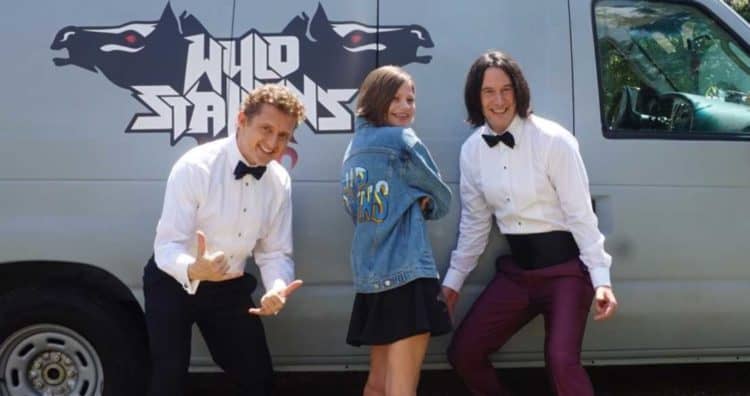 Just when you think the younger generation won’t be able to get into the same stuff a lot of us did as kids, something like this happens and it becomes apparent that the classics, the good, the bad, and the goofy alike, will be just fine so long as someone remembers them. And likewise, just when you think Keanu Reeves can’t get any nicer or become any better of a person, he goes and helps a young teenage girl live out her dream of meeting her favorite movie star on the set of Bill and Ted Face the Music, the upcoming third addition to the movies that a lot of us enjoyed when we were younger. To think that someone from the current era would be a Wyld Stallyns and Bill and Ted fan is kind of impressive as well as uplifting since it gives some hope for the future that the older stories will be upheld for a while to come yet. Jeremy Dick of MovieWeb managed to capture the excitement of the moment that helped one lucky girl enjoy what could only be described as a day that she’ll remember for some time to come.

But it’s also a great thing to see since it shows that Keanu Reeves isn’t just an act and his costar Alex Winter is just as cool when it comes to granting the kind of boon that the Make-A-Wish Foundation was built for. A lot of the kids that are entered into this program tend to make wishes that are pretty down to earth and fairly simple when one really thinks about it, but the actors and celebrities that grant them are in some cases not quite as gracious. There are those that go the extra mile for their fans and tend to appreciate those that root them on either because they know that without the fans they wouldn’t be where they are, or because they’re generally good people, or both. Keanu Reeves though has been proving that he’s something of a saint throughout recent years as he’s shown that he truly appreciates his fans and will go a long way for those that he can do something for. In this case it was allowing this young woman in the picture to meet both himself and Alex Winters and to sit and watch a scene from the upcoming movie being filmed as it happened. That’s something that numerous fans would love to see since it’s a privilege that people don’t get that often.

Regardless of the many roles that have made him great, the role of Ted “Theodore” Logan is still one that a lot of people have kept in their hearts since it’s one of the many that helped to make Keanu who he is today. He’s had his share of ups and downs in the movie industry and he’s taken on good and bad roles along the way, but overall he’s been a force that’s stuck around for a good long while and only seems to be getting better as time goes on. As Ted though he was nothing but great, apart from the second movie as a lot of people tend to think of it as a bit subpar in terms of the Bill and Ted saga. But all in all the memory of the movie has been something that has kept it alive and the fan base has never fully gone away since the idea of Bill and Ted is something that still inspires a lot of people, both young and old, and is timeless in its own way. The Wyld Stallyns were a pair that had their ups and downs in life and had no direction it seemed, but somehow became the most important men in history and helped bring humanity out of a state of absolute lethargy.

The upcoming movie seems poised to show us a time in Bill and Ted’s lives when they were less than what their legacy was predicted to be however, a hazard of discovering your own future perhaps or an adjustment to the timeline maybe to keep them humble and honest while still allowing them to one day reach their destiny. It does have a kind of poetic feel to it, doesn’t it? After all it’s been seen more than once what the act of just giving something to anyone can do and it’s rarely ever a good thing since without effort, hard work, and a true appreciation of what you earn there’s really not much to say about success other than the fact that it can break down just about anyone if it’s experienced too often. Maybe this movie is to finally teach Bill and Ted what it means to really earn their place in history and finally live up to the legacy they learned about so long ago. It’s a thought.