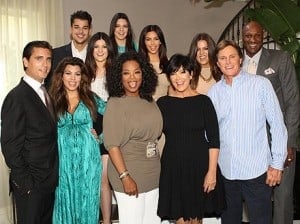 If you are a Keeping up with the Kardashians fan, you probably watched their big Oprah’s Next Chapter interview that aired a few months ago. We watched as Oprah took on almost every member of the Kardashian & Jenner clan to get inside the “brand” and spill some little known secrets. On this latest episode of Keeping Up With The Kardashians, Part 1 of Kardashian Therapy, we get a behind the scenes look at how the interview went down.

Kim’s beau Kanye West comes over with his stylist to give Kim a complete wardrobe makeover.  As the stylist cleans out the closet, the donation pile gets bigger and bigger. Kim quietly panics, but in return, Kanye fills up her closet with all new clothes.  Khloe comes over and freaks at the amount of clothes that were discarded.

Tension rears its head on the business end of the family dynamic. Rob is in Las Vegas to judge the Miss USA pageant.  Kim also hits Vegas to promote her new perfume. She and Rob battle over the idea for his men’s clothing line.  He wants to use his middle name, Arthur George, for his clothing line, while Kim reminds him she uses a similar name, Robert George, for her high end clothing line at DASH. He loses his cool, telling her it’s his name and he can do with it what he wants. Then he’s annoyed when he tries to promote his upcoming line of men’s socks on the red carpet, only to hear the reporters’ questions focus on his famous sister.  Rob is also pissed at Kris, who he feels doesn’t support his business ventures the way she does for Kim.  The sisters have a business meeting about a line of makeup. Khloe isn’t happy when Kim disagrees with all their preferences and tries calling the shots herself. Next, as the upcoming Oprah Winfrey interview is discussed, Kim announces she’d rather be interviewed alone, not with her sisters. Kourtney takes offense, because it’s sign that Kim wants to break free of their threesome.  In the same conversation, Rob complains to his mother that he has no income, because she doesn’t make time to support him.

All the tension looms overhead as they ready for Oprah’s arrival. Kris greets Oprah with a hug, then one by one the rest of the clan file in to hug Oprah. The official promo shots are taken and Rob feels like a jerk when has to pose with Kendall and Kylie for his Oprah picture. Kourtney is especially nervous about letting Scott loose in front of Oprah.   And true to form, Scott blurts out “a$$hole” in his interview.  Rob isn’t thrilled that his only part in the special is being brought in toward the end of the the three sisters’ joint interview. Nevertheless, the interviews overall are a success and Kris is pleased.

Kim tells her sister she wants to pursue a lingerie line in the Philippines, assuring her sisters it doesn’t conflict with any of their other deals. Khloe jumps on it and accuses her of diluting all their joint business ventures. Kim doesn’t understand why she can’t do some things on her own, while Kourtney doesn’t understand why Kim would want to.  Khloe decides that a group therapy session could help.  And not only because of Kim, but Rob’s recent behavior and Kourtney’s issues with their mother warrant some emotional clean up. Khloe notifies Kim that a family therapy session is being planned. Kim’s isn’t thrilled but decides to support them, not thinking there’s anything wrong on her end.  Right before the session Rob blows up at Kim, accusing her of being selfish, squashing his business ideas, and wanting all the attention for herself.

The three sisters, Rob and Kris sit down with the therapist.  Khloe gives the intro, pointing out everyone’s issues and that fact that Rob and Kim had a fight beforehand. They discuss Kris’ favoritism for Kim and the siblings talk about its effect on them. Rob discusses that he feels like the loser in the family and how Kris doesn’t have time to help him. The therapist probes him more, which makes him dissolve into tears and he leaves. Khloe runs after him and Kourtney starts to cry. The therapist goes after them and finds Rob sobbing in another room.

There are more tears in store on Part 2 of Keeping Up With The Kardashians: Kardashian Therapy, airing Sunday, September 2 at 9 p.m. (ET) on E!