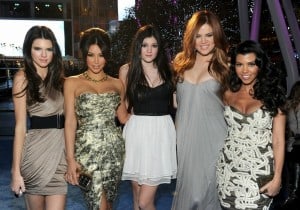 The latest Keeping Up With The Kardashians is all about boobs and babies. Kourtney wants more kids, Scott doesn’t, Kris gets her boobs done, and Kim and Khloe visit a fertility clinic.

Kourtney is preparing for the birth of their second child and drops hints to Scott that she wants more kids. She really freaks Scott out when she says she no longer believes in the birth control pill. She tells Scott he can wear a condom if he wants to, but of course he doesn’t. She also says there are others who will gladly give her more kids if he doesn’t. Basically she has backed him into a corner.

Kris visits her plastic surgeon Dr. Harry Glassman (ex-husband to Victoria Principal) to see about having her breast implants removed. He promises her he can remove, reshape and ultimately make her look better and thinner. On the day of the surgery, Kris is nervous and her friends show up for support.
Scott heads to Las Vegas to celebrate his birthday without Kourtney. He confides to his friends that he doesn’t want more kids at his age and may need to get a vasectomy. His friends don’t understand why he can’t just talk to Kourtney, that she can be reasonable sometimes. We all know she can’t. Scott visits a doctor for a consultation without Kourtney’s knowledge. The doctor tells him it’s a permanent solution and he needs to be prepared. Rob tells him he’s too young and not to do it.

Kendall and Kylie raid Kris’ closet for fashion pieces to help them with their gig as Seventeen Magazine contributors. Bruce catches them and can’t believe Kris gave permission for this. Lucky for the girls, they got her permission while she was drugged post-surgery. After Kris recovers, she can’t find a blouse in her closet. Bruce reminds her she gave permission while she was on pain meds. Kris is pissed and decides to secure her closet. A few days later, the girls try to hit the closet again, and find they can’t get in. They search for a key and Kris catches them. She tells them there will be a sign in/sign sign out system with video from now on, but the girls know they will find a way around it.

Kris invites the family over to see her new breasts. Khloe and Scott are disgusted that she would do this, especially because she still has stitches. When Scott makes plan to go to dinner with friends and doesn’t mention it to Kourtney, he counters with the fact that she makes decisions without running anything past her such as birth control. She confronts him about his doctor visit which she heard from Rob. He blows it off, reminding her again that she never consults him about anything.

Kim casually mentions that she wants to visit a fertility clinic and look into freezing her eggs. Her intent is to get Khloe interested in going as well. Kim says she will make them both an appointment. Kourtney complains to Khloe about Scott’s hiding his vasectomy plans from her. Both Khloe and Rob tell her she is as much to blame for threatening him and making him feel like just a baby maker. Scott and Kourtney talk it out and agree they need to discuss things and not make decisions without the other. Funny coming from Kourtney.

Kim and Khloe have ultrasounds and blood work at the fertility clinic. The doctor tells Kim if she wants to pursue freezing her eggs she can. He turns to Khloe and tells her she is not ovulating. Without producing an egg, she can’t get pregnant. He doesn’t seem to offer up any treatment or solutions, so we really don’t know where this leaves Khloe.