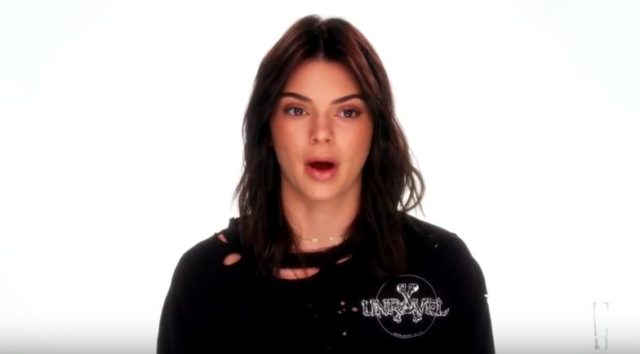 Last week’s huge story on Keeping up with the Kardashians was Kim Kardashian’s retelling of the story of when she was robbed in Paris.Â  It was an extremely chilling moment on the show and no matter what you might think about this family, that kind of experience would shock anyone.Â  It was one of the few times I felt an extreme amount of empathy for Kim.Â  She may be a huge reality star and seem untouchable, but her experience proves she’s a human being just like us and is just as vulnerable.

It looks like the “scary” stories will be continuing tonight on another episode of KUWTK.Â  As it turns out it’s not just Kim Kardashian who has had terrifying encounters in her life.Â  Her little sisters Kylie Jenner and Kendall Jenner have stories that involve stalkers.Â Â  The first story involved Kendal.Â  One night Kendall came home and there was man sitting on the side of her street.Â  Eventually the man broke into her home not before banging on the window and screaming at her.Â Â  He was eventually arrested and luckily Kendall wasn’t harmed.Â  Remember folks, this is just one incident.

Kylie’s story is so bad she breaks down into tears in front of the cameras.Â  While many of us think that this family has it easy and has it “all” that’s far from the case.Â  Along with all the riches and “good” of being a huge celebrity, there’s a much darker side that gets revealed on tonight’s episode.

Here are a couple of previews: