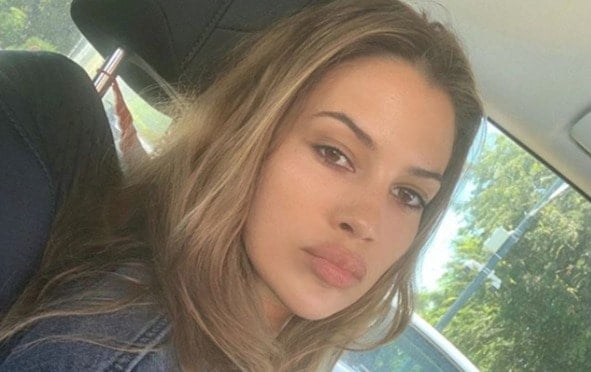 In the modeling world, glamor speaks for you. However, in the world of Kenya Kinski Jones, she is the glamour. She is a professional model working for various modeling agencies around the world. She is a fascinating figure to look out for if the fashion world is your cup of tea. Not much is available about her, as she mostly keeps her personal life under wraps. However, if you want to know more about this glamorous model, stick on as we take you down ten things you did not know about Kenya Kinski Jones.

Kenya Kinski Jones comes from the artistically inclined family of musician Quincy Jones. Quincy Jones is a singer, composer and a key figure in the music industry with a record 80 Grammy nominations to his name. Kinski’s mother is model and actress Nastassja Kinski, who has made appearances in over 60 films all over Europe and the USA. She is the paternal half-sister to Rashida and Kidada Jones, who also grace the entertainment scene as actresses, models, screenwriters, among other capacities. Quincy Jones III, a producer, is also her half-brother. With such a family, she was sure of the right influences before hitting the runway.

One thing that stands out when you meet Kenya Kinski Jones is her complexion. Possessing a caramel hue, it is one of the factors that endear her to the modeling career. The appearance stems from her biracial ethnicity. Her father is African American, and according to DNA findings, he also has some European ancestry. Her mother, on the other hand, is German. She is partially of Polish decent courtesy of her grandfather, who was an ethnic Pole and naturalized as a German.

According to Wmagazine, Kenya began her modeling stint when she was young, a teenager to be precise. It is during her mother’s sessions in front of the lens during a photo session where photographer Brice Weber noticed her and saw she had a gift, fit for modeling. She had stints modeling for him in Spain for a Vogue spread, as she gained much exposure to the art of modeling. She made her runway debut in December 2016, at the Chanel Pre-Fall show, where she got to meet others scions of fame such as Lilly Rose Depp, Selah Marley, and Sofia Richie.

Drift back to two decades ago and meet a young Kenya Kinski Jones and tell her about modeling. The response would possibly be a blank stare followed by a rush to the stable to ride her horses, her passion at the moment. When growing, Kenya describes herself as a nerd obsessed with horses. She was excellent at riding that she once considered going to the Olympics to showcase her skills. She even had a pony named Lilo, from the cartoon show Lilo and Stitch. However, growing changes people a lot, and it may come as a surprise that she does not ride horses anymore.

Growing up in a household where animals were common as pets, she developed a love for them and observed that their rights had to be upheld. Apart from her horses, she had eight dogs and five cats, which she had a close connection to. She even became a vegetarian when she was so young at eight years old. Looking at the impact animals have for her, she feels it is her responsibility to be a voice for them, putting her public figure status to play. According to Vice, her love for animals is what compelled her to enjoy working with Stella McCartney, another model who advocates for animal rights.

Despite coming from a privileged family to her, schooling was a priority. She put too much focus on her tertiary education that she even put her modeling occupation on hold. As evident from TV Show Stars she attended Loyola Marymount University, where she graduated in 2015 with a degree in English. After completing school is when she took her career head-on, making her runway debut the following year.

Though most of her personal life is on wraps, her long relationship with her boyfriend cannot escape the radar. Since 2011, she has been seeing Will Peltz, an actor, and son of billionaire businessman Nelson Peltz. They met when her mom invited her to the set of a movie where Will also featured, and the rest is history.

Every celebrity has fans interested in knowing her value. It cannot be far from the truth for Kenya Jones as there are several speculations of what she takes home and her worth in general. According to reports from various websites, her net worth is somewhere around $500000. Though this figure is merely speculative as Ms. Jones will surely not go announcing her net worth to everyone.

Kenya Jones is beautiful and fits in the fashion world. She has a tall build, standing at 5 feet, 8 inches tall. She has brown eyes and hair of a blonde shade. She rarely discloses her body weight. Her mixed heritage gives her a unique complexion that makes her stand out from the pack.

As a model, your agency is key to getting you the best exposure in the industry and bring more gigs your way. She is under four model agencies, the central being New York-based The Lions Management Agency. She is also under Ford Models for the Paris modeling scene, Models 1 in London, and Hamburg-based Model Management. She works harmoniously with all of them to ensure she always has a gig coming through.

Coming from the talent and entertainment industry-oriented Jones family is Kenya Kinski Jones. Quincy Jones’ daughter, has made a mark for herself in the modeling and fashion and is on the path to being one of the most sorted runway glams. Above are the ten things you might not know of her that you now know.