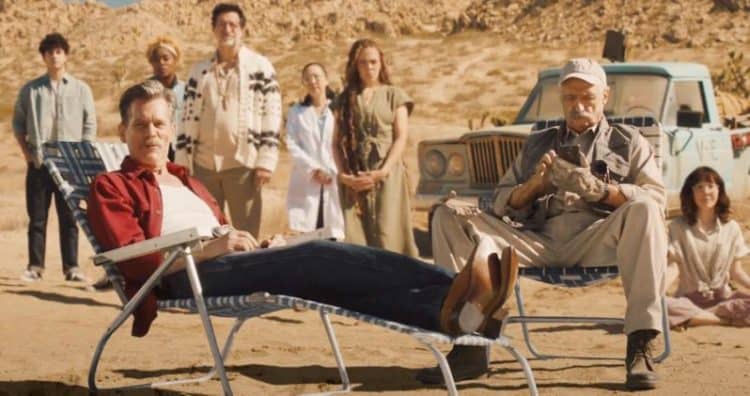 It’s kind of interesting to wonder why Kevin Bacon didn’t push for any other Tremors stars to join him on this Visible commercial. Did anyone else happen to listen to the actual commercial or were they waiting to see a shot of Perfection as well? In any case, it kind of reiterated the idea that Bacon wasn’t too fond of his time in Tremors initially since he thought it was going to tank his career. It was likely one of the biggest reasons that he didn’t come back for the sequel. Talking about it now isn’t such a big deal since he’s had a great career and to be honest, people kind of like remembering him in Tremors since it was a fun movie no matter how campy it was. The duo of Bacon and Fred Ward was great enough to be dubbed as one of the best pairings in cinema, even if the movie is something that only the most diehard fans hold up as something that’s worth talking about. Tremors was a lot of fun, and Burt Gummer, aka Michael Gross, was a great part of it too. Using it for a commercial isn’t the worst possible thing to happen, but it’s interesting to see how Bacon’s attitude has changed about the movie over time, even he didn’t manage to stick around along with Gross, who’s been cashing in on the franchise for a while now.

One way to know that a movie is old but still loved in some way is to see it featured in a commercial with one or more of the original actors, if possible. This is evidence of just about anything that was popular decades ago since to a lot of people it might be quirky and retro, but to those of us that were around when these ideas first came around, it’s fun to revisit our favorites if only for a matter of seconds since it means the memory of them isn’t dead. Tremors has been continuing for a while now, and it’s even seen a series try to spring up and be successful, but it’s been Michael Gross that’s been keeping it alive, along with writers that come up with some of the most insane ideas for the graboids, even if they manage to capture the attention of the diehard fans that want to see the idea keep moving forward. At this point, it really feels as though the franchise should have ended at the first or possibly second movie, but somehow one after another kept getting funded, and here we are with a Tremors 7.

The excuse used in the movie for Bacon’s absence was that he’d married a good woman, or at least that was Earl’s explanation, and he didn’t want to risk his life any longer. But according to the revival that was almost a reality he’d made his way back to Perfection for one reason or another. We never got to find out this reason since SyFy never aired the show and it was canceled before it could even be given a chance. Fred Ward left after the second movie as it was thought that his character, Earl, had met his dream girl and had had his fill of the graboids and decided to get out of the habit while the getting was good. In other words, once Val and Earl were able to finally get away from the graboid nonsense they were gone, without any hesitation, and with no intention of coming back. It’s thought that either Bacon’s salary for the movie or the cost of the effects might have been the reason why it never came to pass, but after the pilot tested so well it was hard to accept that it was no longer desired. It was a hard pill to swallow, but the fans still have the movies, so there’s that. But seeing Bacon revisit the movie for just a brief moment is enough to think that might have a bit of a soft spot for Tremors still, even if he wasn’t all that sure about it when going in.

When you look at it, the careers of those that helped to make the movie weren’t really damaged by the experience since those that kept moving forward to bigger and better things were just fine, while those that had been doing bit parts and weren’t exactly on a path to the front of the line stayed right where they were, or eventually found themselves becoming extras and supporting actors for other movies and TV shows. In short, Tremors was the type of movie that didn’t really make or break anyone, it was just a fun movie that people either liked or felt wasn’t worth the hype. Personally, the first movie is definitely worth the hype, but after the second one things just kind of head off in a very strange direction.