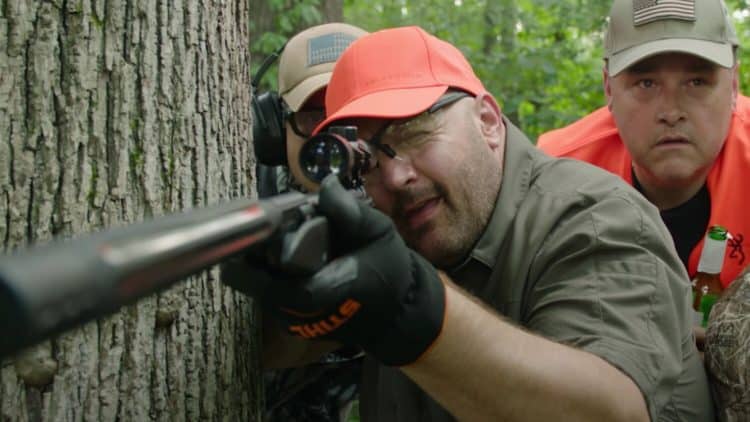 The continual debate between meat-eaters and vegetarians is kind of amusing really since both sides tend to present their case in a fashion that confuses the other side and yet both are just as entitled to eat what they want and leave each other alone. But yeah, it is pretty funny to see Kevin James actually turn down a veggie burger after having a daydream about killing wild carrots with what looks like a sniper rifle. It’s kind of like the reverse reaction that a vegetarian or a vegan might have when thinking of how an animal is shot, and it definitely works for the comedic effect. Kevin James has certainly changed his look in recent times as he’s gone with the shaved head a couple of times now and sported this look in the movie Becky, which was a far cry from the comedies he’s been known for up until now. This could be a shift that a lot of people didn’t see coming since it appears to be something he’s embracing when it comes to his performances and in a way it kind of works. Whether he’ll keep going with it or not is hard to say since actors tend to change up their style and their look every so often to keep things fresh and keep the fans on their toes while they experiment with new fashions.

For a long time now he’s been one of the funny big guys on stage and on screen since his standup, like many comedians, got him to where he could start appearing on screen with some of the biggest names in the industry, most notably as a favorite of Adam Sandler since he’s appeared in a few of his movies. He also had a chance to show up with Henry Winkler and Bas Rutten in Here Comes the Boom, which was comedic but also kind of a switch for his style of acting. But Becky, hoo boy, that was a different movie altogether since he played the part of a white supremacist who was also a felon and had come looking for something that he’d left in a certain location. Unfortunately for the family living at the home they happen to be there when he comes to collect, and as a result they end up paying the price for being witnesses, save for the daughter, Becky. What proceeds to happen is that while Becky is being chased about the surrounding woods she shows off a definite psychopathic streak as she ends up killing the men that have accompanied James’ character before taking on the main bad guy, dispatching him in just as messed-up of a fashion as the others. When it comes to showing just how truly disturbed someone can be during their younger years this movie is next-level in terms of what Becky ends up doing to the men.

But Kevin’s reaction upon thinking of how a wild carrot might be shot in the woods and then taken home to dice up for burgers, that’s just classic. There are so many jokes out there concerning vegetarians and vegans and their choice of lifestyle that it’s hard to remember them all, but the truth is that in some ways eating vegetarian and vegan can be a lot healthier, though it might take a little bit of work since a good deal of the population eats meat, and we derive a lot of materials from animals like it or not, no matter how they’re raised and killed. There are so many arguments and counter-arguments between the two lifestyles that it can make your head spin when trying to think of the morality that comes from eating meat versus eating just fruits and vegetables. Many would argue that we don’t need to eat meat for protein, while others would argue that eating meat is one of the most natural things around since humans have been doing this for a long, long time. Then others might argue that we’re omnivores and can survive with a wide range of foods, and that protein can be derived from other sources apart from meat. But of course many people are still going to argue that eating meat is fine, so long as it’s prepared and cooked in a safe manner.

The debate is likely to keep going for as long as there’s meat in the world to eat, and no matter who gets the upper hand at any given moment, it really doesn’t matter. The comedic look at the idea of killing a wild carrot in the woods is bound to be taken in a lot of different ways, but if you can laugh at it then it’s likely that you don’t care which side of the debate is stronger. It’s just fun to laugh sometimes.