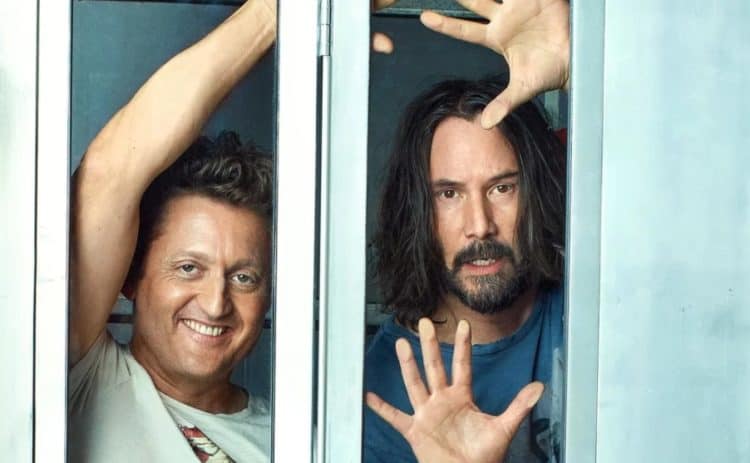 No offense to Kevin Smith, since the guy is awesome and everything, but the fact that he sheds a tear over movies he thinks are great still isn’t enough to win a lot of people over since as the writers at MovieWeb state, it’s only building up more hype for the rest of us. Bill & Ted Face the Music is supposed to be coming out later this summer unless things change, but the famed director had the chance to review the movie and he couldn’t help but think that it was one of the best things that he’s ever seen. One might point out that he was stoned to the bone when he watched it, but a lot of people might not think that means anything. What does mean a lot to people at this point is that Smith loved it so much that he’s willing to continue hyping it as he indicates that the movie stuck the ending in a big way and went out on a note that was absolutely perfect. Given all the time that the movie’s had to be made there’s a lot of expectation at this point since Bill & Ted’s Bogus Journey had its moments, but it wasn’t quite the same as the first movie, which became a cult classic after a while. The fact that Kevin Smith cried during the movie? That’s a lot of hype that some folks might take as a good sign, but let’s not get ahead of ourselves.

Far be it from me to say that this third movie is going to be over-hyped, as I enjoyed the last two, but hype is the main problem for any movie, particularly if it gets continual hype before it’s ever released. So far this movie has been talked about at length and given over to the kind of speculation and ideas that are still kind of vague and not fully formed. But that’s the beauty of it really, the trailer is great since it doesn’t show too much, and the idea has never really been pasted and plastered across the internet in a way that’s been deemed too much either. With Smith giving this kind of ringing ovation though it’s a worry that the hype will increase exponentially and possibly build the movie up too much, perhaps to the point where it can’t live up to its own hype and will end up disappointing a good number of people. We can hope not obviously since a lot of us have been looking forward to this movie for some time and the prospect of Bill and Ted going out on a masterful note is most excellent, enough for an air guitar riff even.

The idea that they haven’t composed their world-saving song just yet is all that people really need to know about the movie since a few other things could be guessed at, such as the two of them being fathers, perhaps having trouble getting their creative legs under them, and even finding the needed inspiration to really get the song going. If anyone remembers, Bill and Ted were still pretty young when last we saw them, which could mean that they still had a lot of growing up to do as characters, but somewhere along the line they obviously let things get out of control, which is tough to grasp since they’d been to the future and seen how things turned out, so it makes a person wonder just how they would screw it up so bad in the past. Of course if anyone’s been paying attention to all the time-traveling movies in cinema throughout the years, the future is rarely set and can usually be changed in some fundamental way. That’s the problem with knowing the future really, there’s always a way to screw it up or miss out on what the future was supposed to be. In Bill and Ted’s case it would appear that they suffered major misstep along the way and never really recovered. What that has to do with the hellscape that’s seen in the trailer though is hard to say since Death is making a return in the movie, so obviously something goes pretty wrong at some point.

But Kevin Smith crying is bound to be seen by a lot of people as an indication of perfection since he usually has something to say, and emotions aren’t high on his priority list for movies that he thinks are okay but not as great as they could be. Plenty of people are going to take this as a sign that the movie is worth seeing and will be a definite hit. But again, tread with caution when letting your expectations get too high, just in case. This movie has been anticipated by a lot of people, but keeping your hopes at a median level might facilitate real enjoyment.