Home
The Late Show
Kevin Spacey On Underwood Vs. Trump: “We Have Better Writers” 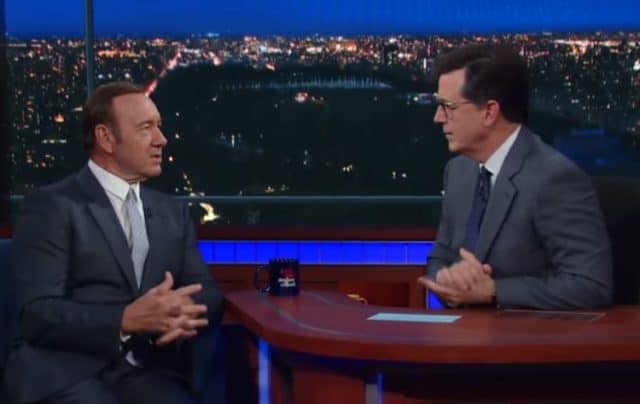 I’m beginning to have a very hard time trying to figure out if I like Kevin Spacey in real life or not anymore.Â  When he first burst onto the scene as an Oscar caliber actor I liked the attention he was getting and I enjoyed seeing him speak anytime he’d be on a late show or when I could catch an interview.Â Â  But lately I feel like he gives off a very arrogant vibe.Â  I don’t even feel it’s confidence, it’s arrogance and it annoys me.Â  My guess is that it’s 100% related to the fact that he plays Frank Underwood on House of Cards and that character is about as arrogant as they come.Â Â  I don’t know, I’ll give Spacey the benefit of the doubt here.

Speaking of Spacey, he was on the Late Show with Stephen Colbert last night to discuss House of Cards, among other things.Â  One of the biggest topics of the night was Spacey’s character Frank Underwood vs.Â  Donald Trump.Â  Who is the more polished and developed President?Â  Without hesitation Spacey said Underwood and credited the writing staff of the show as proof.

Check out their full interview below: