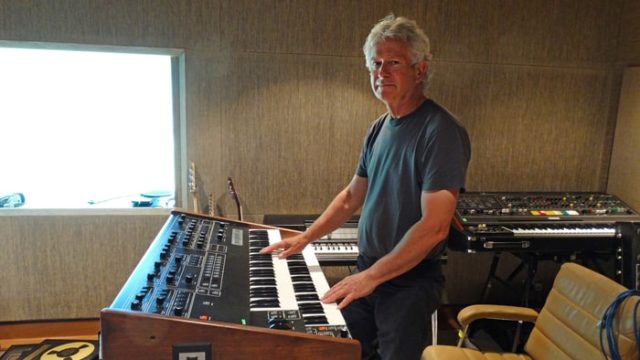 Tony Banks embodies the theory that the signature sounds of some of the greatest rock & roll bands were established by keyboardists. That’s a bold statement. It isn’t meant to diminish the profound prominence of the talented guitarists, bassists, drummers and singers. It simply states what the band members themselves often say. It’s also what many fans appreciate.

In the case of Genesis, Banks used multiple keyboards with innovative electronic effects to create a distinctive Genesis progressive rock sound. Though the band had many musical style changes throughout its existence, Banks played piano in the band on a regular basis the entire time.
Banks began his interest in keyboards while very young. He said he started “picking out” melodies on piano at age four. Banks was a young child in East Sussex, England, when he began formal classical piano lessons. He was about 7 years old and attending prep school at the time. In recent interviews, he’s specific about the fact that he loved to play some of the classics he studied. But, he was always more interested in improvisation, and he believed that his improvisational keyboard skills just naturally “led him into composing”.

That’s one reason why Banks has been aptly described as a “jazzist keyboard player”. He described his own keyboard work as “played melodies” rather than “sung melodies”. It was his way of specifying an important aspect of his contribution to Genesis. The norm for most other groups was to have the lead singer or guitarist on melody. Banks also used synthesizer and keyboard to back-up and counterpoint the guitar riffs. Here he is leading, then supporting, guitar and drums with rhythmic melodies, varied chordal textures, and percussive cross-beats in Second Home by the Sea:

Banks established a keyboard legacy for pianists who continue to study his intros and accompaniments today. Tutorials on techniques Banks used in his most iconic solos fill the internet. Those who would emulate his style pour over them. The tutorials illustrate technical requirements which equal those necessary in the pieces of Debussy, for example. “The wind over the plains” has similar rhythmic vitality to “The Lamb Lies Down On Broadway”, though it’s only one example of similarity between single pieces of classical and rock music:

“The Lamb Lies Down On Broadway” begins with Banks’ furious keyboard introduction. The rhythmic pattern he sets up in the introductory section continues under the lyrics, and ripples along with the complex drum and guitar polyphony:

Here’s Tony’s iconic “In the Cage” performed in 1984 at the National Exhibition Centre, Birmingham, England. Tony’s classic Arp ProSoloist performance is considered the perfect progressive rock era solo. His fans gave it “perfection” status, and it’s well-deserved. Tony’s famous solo has been covered for decades, but here he is playing his own version:

Here’s Tony setting up tempo and sonic environment at the Duke Tour May7, 1980:

When Tony was given the Prog God award for 2015, his fellow band member Peter Gabriel roasted Tony gently. With dry wit, he poked fun at Tony’s long keyboard solos. They entertained the crowd, but kept the frontman wondering how long he could “wiggle his bum or shake a tambourine”. Peter specifically described Genesis as “perfectionist entertainers” and noted that Tony’s talent was intrinsic to their successes. Genesis albums sold millions. The band members had a goal of never playing a bad concert, and their perfectionism and musicality forged the group a way to the top.

Progressive Music Awards Editor Jerry Ewing described progressive rock keyboardists as the heroes; with Tony Banks as being the most heroic of all. Tony acknowledged that he “spent his entire career trying not to be noticed”. Tony also reminded everyone that he was delighted to be in the company of the greats he played with. He named Rick, Ian, and Peter as those. Ultimately, Tony Banks was a hero in the eyes of his fellow musicians; high praise indeed.

Judy Greenlees is the co-author of a decidedly different romance novel, Cherished to the Utmost. She’s also written several short stories, a few zombie apocalypse adventures, and the prologue for 8 Women of God. Judy has written for the Internet since 2007, focusing on the arts, culture, and science fiction. Her more than 34 years as a fine arts professional has included founding Artistic Journeys, a non-profit, arts educational organization in Southern California. She has taught music, art, and English, and performed as a piano accompanist on many stages in different venues. Her favorite was the Royal College of Music, London. Judy’s formal education began when she was a public-school student in Hashimoto, Japan. Her B.A. in Music History from CSU Fullerton was followed over 20 years later with an MBA from NYIT. She currently lives in a lovely small town in New England near her daughter, son and daughter-in-law.