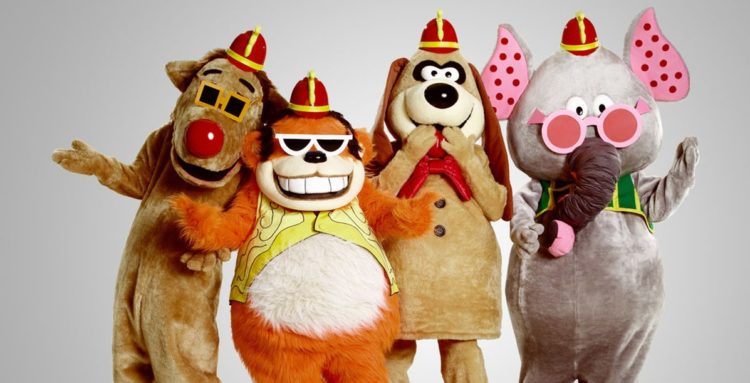 As Michael Kennedy of ScreenRant has already said, this is not a goof. The Banana Splits are a kids’ show that was popular in the 1960s and ran for only three seasons, but still managed to become part of pop culture history. It was believed at first that announcing that this show was getting turned into a horror movie was met with some skepticism. But it would also appear now that it’s not a joke and things are moving ahead in due course so that people can in fact watch an old 60s show take on a murderous lean that sees the main characters slaughtering the guests and possibly becoming giant, murderous robots instead of insane actors lashing out. It’s hard to tell from the trailer apart from the red, glowing eyes that appear once the characters seem ready to start swinging.

As you can imagine this opens up a LOT of possibilities moving on from this project since if kids’ shows are no longer taboo when it comes to violence, which it seems like they haven’t been for a long time now, then there’s a lot of different developments that could possibly take place. From live shows to cartoons it seems that the most inane and far out prospects could be entertained as things begin to move onward. Think about it, there might only be a few shows that would be taboo and even those have already been parodied in the past with a negative lean. So what’s to keep Hollywood from playing it fast and loose with the old stories and characters that we grew up with? What’s to stop any studio from taking Barney and making him into a flesh-eating, grape-colored maniac? How long will it be until someone attempts to create a fictional story with a Mr. Rogers character that actually IS the pedophile that rumor has it some folks accused him of? Some subjects might be a bit too fringe, but it also seems as though the gloves are coming off when it pertains to what kind of material Hollywood is willing to take on and how they want to develop it.

One can imagine the opposition that might come from such thinking as Beth Elderkin from Gizmodo seems to mention, but also the kind of ideas that might still get pushed ahead since the possibilities aren’t exactly as perverse as you might think. Barney for instance was one of those characters watched by children that some people genuinely had an issue with for various reasons. Even antiquated shows such as Howdy Doody might be up for grabs if someone could procure the rights. In this current era there’s not a lot that seems to be off limits since the idea of creating something that people will watch is the only real deciding factor when it comes to whether or not something will be made. The Banana Splits movie isn’t even taking itself that seriously it would seem since obviously it’s a group of people dressed in costumes going on a killing spree and there’s not much else to it. The cancellation of their show is perhaps too big of a blow or the new and improved robots that are acting out the show are going to be the biggest draw it feels like, largely because it’s so ridiculous and so out there that people won’t be able to look away.

Just watching the trailer seems to indicate however that this might be a one and done kind of movie, since if there is a sequel it would be a humongous stretch of the imagination to achieve, though not impossible. Nothing is ever really impossible when it comes to stretching the boundaries of fiction it would seem, but good taste is something that people tend to take note of, and promoting more and more kids’ shows as horror movies might eventually backfire on the industry if they choose to pursue such a course. Some folks, like Gael Fashingbauer Cooper of Cnet, are just fine with the premise however. It has little to do with the morality or ethics of such a development and more to do with the idea that some parents might actually seek to boycott said movies and possibly get the studios shut down. This isn’t entirely possible in some cases but it’s still a thought. But to be honest, this movie seems just insipid enough that people might be tempted to watch it more than once and eventually label it as a cult classic.

You might want to laugh at that notion but then again it might be worth remembering some of the campier horror films that people still watch and talk about to this day. A horror film doesn’t necessarily have to be good enough to win an Oscar or even a notable award, it just has to be good enough to get the attention of the people, and this movie seems like it will be able to do that quite easily.