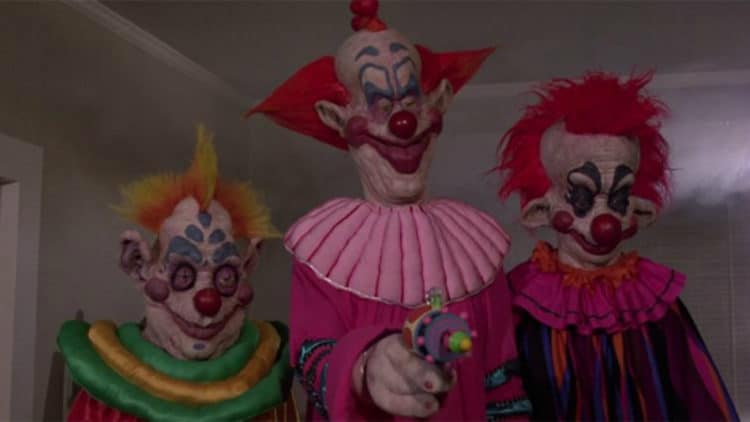 Giving the fans what they want and simply bowing to fans that are willing to rant and rave to get what they want are two very different things since Killer Klowns from Outer Space was a stupid movie even for the 80s, but the trick is that it was a stupid movie that was so stupid that it was good since fans have been wanting more for years. The talks for The Return of the Killer Klowns, or something like that, are still happening at Netflix, who has the money to make this happen, but so far nothing has really taken off. A lot of people want it to, but at the moment talking is as far as it’s gone, and there are still folks that aren’t too sure it would be the wisest idea to let it go ahead. It wouldn’t be the worst idea to be fair since there have been some doozies that have been allowed onto the screen in recent years, so saying no to this one doesn’t make sense considering that people actually want it. But then, when do fans really know what they want? There are moments to be sure, but far too often it’s been seen that fans want one thing and once they get it, they claim that they wanted something else and proceed to throw a hissy fit with bad reviews.

From a personal standpoint, this was a pretty dumb movie, and yet it was creepy and worked as a horror flick since a lot of people are genuinely scared of clowns, which helped it to stick around long enough to become a cult movie that quite a few people came to enjoy. There is plenty of whimsy when it comes to the clowns since everything in their arsenal appears comical and as though it wouldn’t harm anyone, but as people have seen, everything they use is so extremely dangerous that even the shadow puppets are capable of harming people. Imagine what would be like with today’s technology and what an update of their toys and spacecraft could do for their image. It could be that just like other aliens there are many more of them out there in the wide-open galaxy and they were able to monitor what was going on with the first group of clowns. This would mean that the next group could be better prepared, more lethal, and less inclined to make the same mistakes. Wouldn’t that be a kick, to see another group of killer clowns make their way to earth only to unleash even more horrors upon an unsuspecting public. That thought alone is kind of intriguing, to be honest.

It would also be kind of interesting to see what the clowns might be able to do in a more urban setting such as in the middle of a big city since the original movie had them show up in a small town where they could wreak the most havoc possible. Maybe writing in that a larger force of clowns arrived with more firepower and different types of clowns would be a good idea since it would be kind of fun to see stealth clowns, berserker clowns, and so on so forth that specialized in different methods of reconnaissance and attack that could keep their presence as much of a secret until it was too late for people to fight back. Of course, given the technology of the day, it’s easy to think that fooling people into believing that they’re not evil space aliens bent on violence would be a little more difficult, but it’s easy to think that in a horror movie the writing isn’t always going to follow a logical path, so perhaps there’s something to be said for the idea of putting them in the middle of a city where people are so jaded that they wouldn’t think twice about the apparent threat they pose. Why not put them in New York? Even better, put them in New York and represent the current pandemic so that they might have an even easier time at hiding their ill intent.

Some people are going to be anticipating the return of this movie now that Netflix is in talks concerning it, but others are going to be holding their opinions, good or bad, until it finally shows up, if it does. People need to remember that it was talked about in 2018, and nothing ever came of that. Hopefully this time around things are going to progress a little further since there is something to be done with this movie, which I can’t believe I’m admitting, but it would need to be taken in a direction that’s hopefully a little darker and a little more advanced when it comes to the technology. The clowns’ weapons were effective, but the special effects might be worth working on this time around.