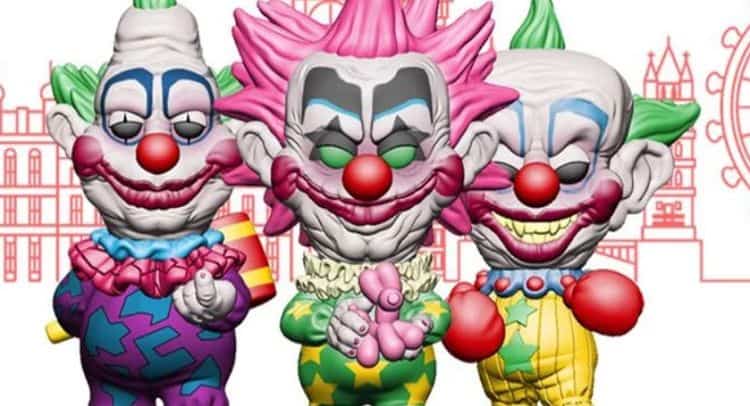 And here I thought having a Pennywise Funko Pop on my shelf was horrifying enough at times. Unfortunately for the sewer-dwelling clown the Killer Klowns from Outer Space kind of have an edge on him since they’re absolutely psychotic and they don’t bother beating around the bush when it comes to killing their victims, they just get right in there and do it. As Jeremy Dick of MovieWeb has revealed Funko Pop has been absolutely killing it with new products being laid out at the London Toy Fair 2020 and among the anticipated releases are these three wrinkly-looking creeps from the 80s horror movie that likely made a lot of people laugh but also stood a good chance of scaring the living hell out of anyone with a serious fear of clowns. It’s not just the idea that they’re an extraterrestrial species that for some reason resemble clowns from earth, it’s the fact that they have a ray gun that shoots cotton candy that can cocoon a human being and all the other crazy stuff they can do to kill people. How the Chiodo brothers came up with this stuff kind of indicates that they were partaking of something stronger than coffee while they were brainstorming.

Still, there’s a reason that Killer Klowns has been remembered for so long and it has a lot to do with the fact that the movie pushed the envelope in a way that was hard to deny since it was so insanely goofy that laughing was the best remedy instead of being scared since everything was just so out of whack with what people might have expected. But putting these three Funko Pops on your desk, shelf, or wherever is the kind of thing that might make a lot of people look at you funny since there are quite a few individuals out there that likely don’t remember this movie or have never seen it in the first place. It’s been decades now since the movie came out but there are still those that would love to see a sequel since the ending of the movie didn’t exactly set it up but there’s always been a place for horrible sequels with moviegoers since the idea is that as campy as the first movie was, the second one would be even more so and possibly bring back the same feelings that the first movie invoked to begin with. At least that’s one theory.

Funko Pop has come up in a big way throughout the years and it doesn’t take much to see that a lot of people have become enamored of the sculpted bobbleheads in their own way since so many of them have been released and there are even some that are considered rare and quite valuable. Some people have a few that signify how much they care about certain aspects of pop culture while others might have an entire army of them. There are those people that keep them in the box to maintain their value and possibly allow them to be worth a bit more down the line, and then there are the fans like myself that break them out of the box since we want to have them up close and personal and not have a layer of plastic between us. Despite what anyone says there’s no wrong or right way to display a Funko Pop character since buying them in the first place is something that a lot of people that don’t understand the need for them still look askance at those that collect them. It’s a part of pop culture, a part that does tend to look a little creepy depending on the characters and also depending on how they’re displayed. For instance some people think that having a Funko Pop of the Cheshire Cat grinning directly at you while working might be kind of odd, but it’s strangely cathartic, as though it’s a tiny receptacle for the madness that writers can experience every now and then.

In any case, the Killer Klowns would indeed be an odd addition to any collection but also one that would tend to indicate that the owner happens to love campy 80s horror and isn’t afraid to display that love for all to see. After all if you can’t have your own space where you can flaunt your own personal style then what good is having a personal style in the first place? It’s hard to say just how much these creations will be but it’s likely that they won’t go for too cheap, especially if they’re being sold as a boxed set or even as individuals. Some Funko’s really aren’t that bad when it comes to price, but others are pretty spendy depending on several factors, popularity and demand being a couple of them.