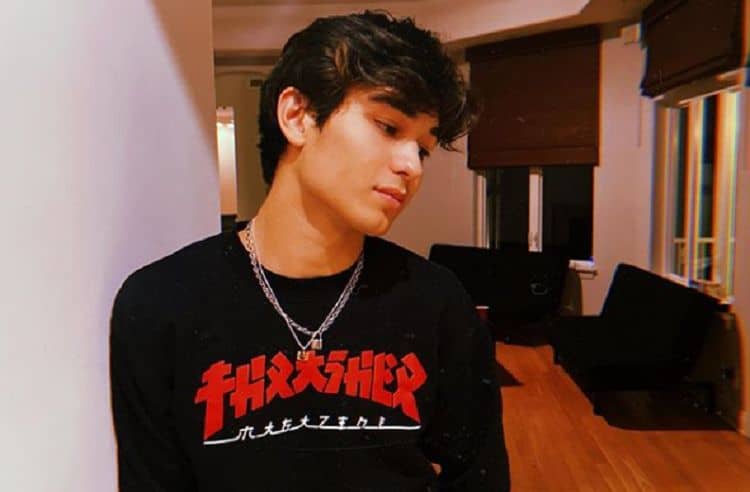 He is the famous online superstar with a huge following on TikTok and Instagram, and his name is Kio Cyr. He’s a young man who rose to fame doing the online thing, we aren’t even sure what, to be quite honest. However, the people who follow him adore him, and that’s good for him. He’s made a business of his online presence, and we cannot think of anything that’s cooler than that for a kid who is growing up and learning to become an adult. However, he’s also been involved in a little drama lately, and we thought we’d get to know him a bit.

Super young, honestly. He’s still only 19. He was born in September 2000. Just a year before 9/11 happened, nine months after the 20th century ended, and in the midst of the shocking nature of Y2K being anything but real. He’s still a baby, though all moms say that about their kids no matter how old they are, right?

2. He’s Got Something Called “The Look”

We don’t know much about it, or what it is, but we know that he considers himself Insta-famous beause of “The Look”. Apparently, it’s a gaze he uses that his fans love, and that it’s nothing anyone can really explain. His fans love it, it’s allowed him to create a business, so go for it. Look away.

He was born and raised in Canada, though he’s living in LA right now. He’s working, living, and playing with some other kids his own age working their game on the social media platform. He utilizes numerous channels, including TikTok, Instagram, and YouTube to manufacture the fame he’s grown over the past few years.

When you’re a famous online star, you can apparently be from a house. We don’t quite get this concept, but we have an assumption. It seems to us that a group of famous people come together, get a house, and they all either live there or spend a lot of time there filming their content. They all work the same game, so they know how this works. Either way, he’s one of the kids from the Sway House, and he’s happy to be there.

Allegedly. We don’t want to spark any rumors if they are not true, and they have denied this. However, he and model Olivia Ponton have been spotted together more than once, and not always in a friendly position. Recently, they were spotted on her Instagram page kissing in a pool only a few weeks after they told all their friends and followers that they are just friends and that’s all there is to it.

6. He’s Accused of Some Inappropriate Behavior

Unfortunately, with fame comes issues. When you are in the public eye, you have to be prepared for the scrutiny that comes your way. This is a young man who is 19, but he’s been regularly accused of having a thing for young girls. And, sadly, we do mean girls. He’s been accused more than once by teenage girls and even his own friends of really having some big feelings for girls as young as 15. Considering he is an adult at 19, he doesn’t need that kind of situation in his life.

Well, we don’t want to say ladies since he’s 19 and the girls he dates are right around his own age – and some much younger. So, we’ll amend ladies man and simply say he really does have a reputation with young girls. He likes them, he’s been called the guy in the house that brings in the most girls, and he’s apparently quite popular with them.

Really, really cutesy stuff, if we are being honest. “Cars” is his favorite movie. He has a clothing line in which he uses an adorable little bear as his logo, and he calls the Biebs and Shawn Mendes some of his favorite musical artists. He’s growing into a young man, and he might be into his adulthood by a year now, but he still strikes us as a child at heart.

9. He’s Got Some Controversy

Again with the fame situation causing some problems. This is a young man who was accused of dating a 16-year-old TikTok star by the name of Lauren Elizabeth at one time. Fans didn’t like it because of the age difference – we get that – and now they are going back and forth. He’s been accused of hating her, and he’s put out some statements to the contrary. His new girlfriend accused this other star of hacking his account, and he’s also had his new – assumed – girlfriend make statements to the effect that she goes through his phone to see if he’s really been in contact with underage girls. She says he has not, but the implication is there.

He’s a 19-year-old young man, so of course he’s into the Biebs. Justin Bieber is someone who was around when he was in elementary school, and he grew up with him. That makes perfect sense, though he did mention recently that he’s felt that Bieber could do better. As much as he loves him, he didn’t seem too impressed with his new sound.