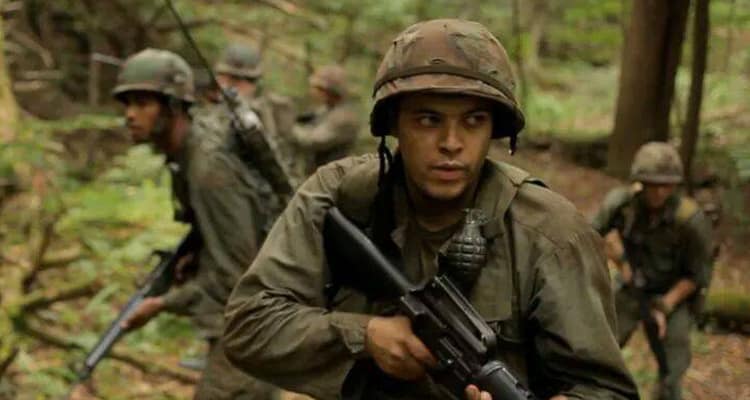 Kit Lang is an award-winning Canadian born actor, producer and writer who stars in Prolific Pictures “Battle Scars” film. He currently splits his time between NYC and LA. In addition to his work in “Battle Scars,” Kit Lang can be seen in the role of Patrick in the comedy, romance movie “Remember Me,” starring Bruce Dern. He can also be seen in the role of Detective Matson in the crime mystery thriller “Money,” starring Kellan Lutz, Jess Weixler, Jesse Williams. Kit is now in production on an international romantic-horror film called “Seeking Esperanza.” Learn more about Christopher “Kit” Lang below:

Although Kit has numerous credits to his name in various productions internationally, the title role of Michael DeLuca in the newly released war crime drama “Battle Scars“ is actually Kit’s debut as a leading man in the film.

3. Kit had to undergo a “Military Boot Camp” for his role in “Battle Scars.”

Prior to filming the battle sequences, Kit and his co-stars were driven upstate New York and then taken deep into Sergeants’ woods and a Captain from the Military. From there, they were given minor tools and had to build a shelter in the rain to camp out in for the next few days. They had to do “fire watch” (taking shifts staying awake throughout the night), and every morning they were awoken to physical training. They were also partly instructed on formations, movements and exercised basic “War Games” to help learn the type of combat soldiers experienced during the Vietnam War.

After the initial production wrapped, “Battle Scars” remained stuck in post-production for another five years. They then decided to rewrite and reshoot more material, finally completing the film in 2020. Upon resuming its principal photography, Kit had naturally “bulked up.” Together with director Samuel Gonzalez Jr, they decided he should “let himself go,” gaining another 20lbs for the role to make the character’s transformation even more pronounced.

The director Samuel Gonzalez, Jr. is a combat veteran who was instrumental in instructing Kit in his experiences. In preparation for “Battle Scars,” he brought Kit into a Veterans Hospital. In hopes of learning more about the realities and effects of war. It was there that a doctor took Kit into her office, and he spent the next few hours learning “a barrel full of knowledge,” for which Kit has credited as the “single most profound experience” in taking on this role.

Kit interacts with many actors in the film. Aside from working closely with director Samuel Gonzalez, Jr., he remains close with many of his co-stars and his filmmaking collaborators. Kit knew Illya Konstantin from Toronto, Ontario, and “Battle Scars” was their first time working together. The same is said of Vince Benvenuto, who knew Kit from Montreal and is their first time working together. During the audition process, Kit met Arturo Castro, who has gone on to star in his own show “Alternatino,” after starring in Broad City for five seasons and multiple studio-released films.

8. Kit is originally from Canada.

Kit was born in Montreal, Quebec. He grew up between both the provinces of Ontario and Quebec. Eventually, he moved to Toronto, before moving to New York City. Now Kit splits his time between Los Angeles and New York City.

9. Kit got his first credits working in security.

While living in Toronto, Kit began working in security at the CBC (Canadian Broadcasting Corporation). It was there where he was noticed and cast in his first television credit; in the after school comedy variety show “The Morgan Waters Show,” which later won a CSA (Canadian Screen Award). Kit was also cast in his first Radio Drama and worked with Eric Peterson (Corner Gas) and Saul Rubinek (Unforgiven).

Kit Lang is a nephew of Stephen Lang, one of the bass guitarists of the renowned 70’s/80’s rock n roll band April Wine. Kit lost his uncle to Parkinson’s’ Disease during the production of “Battle Scars,” and as an homage to his uncle, he and Myles Goodwyn (founder of April Wine) used the band’s music for the entire soundtrack of the film.

“Battle Scars” has been released in Canada, the UK, and the USA through DVD and VOD.