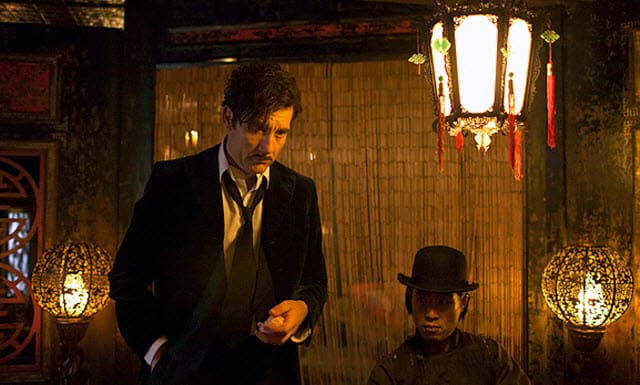 There are two stories playing out in The Knick. The main story, or surface story, is the one in which Clive Owen’s Thackery is a righteous hero. Thackery swaggers around the hospital, experimenting and intimidating, making sure that people know that he is the man in charge. He is a good doctor, and at his core a good person, but he can’t help the dramatic. His ambitions are not limited to saving lives but to being known for it, as well. Thackery needs to be noble. He has a conversation with Catherine Christiansen, the widow of his partner, in which he talks about JL Christiansen lost sight of the “procedure” and focused on the “patient”. He takes an axe to a faulty electrical box, shortly after telling Algernon Edwards that he wasn’t worth having around. Thackery is, THE HERO.

The second story is the one that involves Algernon. They have buried him in the basement of the hospital, refuse to let him do anything but the most rudimentary medical tasks. Algernon isn’t discouraged by any of this; when Cornelia Robertson comes down to his office to commiserate with him, he brushes her off. He’s used to the world trying to hold him back. He wants to be a doctor, a good doctor, maybe even a great one, and he has put in the time and the effort to reach that level. So, while he was working on a little white girl (whose mother can’t stand him touching her daughter) he sees a black woman be turned away for a wound on her arm. In response, Algernon turns the forgotten basement into a hospital of his own, and finds the woman himself and takes care of her. Algernon truly only cares about being a doctor, and that makes him the protagonist.

At this point I would like you all to note the title; you see the name of the show and the episode, and also a set of numbers. This is only the second episode of a brand-spanking-new television program. In only two episodes (one, really, because the characterization of Algernon was a little weak in the first episode) they managed to lay the seeds of a much deeper and fully formed television show than any show really ever has. I really think that shooting it like a ten-hour movie helps with this because the strengths of the pilot episode were in the rhythm and complete vibe it gave off. Very rarely (read: basically never) do you see a show sprout so fully formed.

But there are many, many good side plots and character moments that flesh out these characters. Sister Harriet goes downtown to meet up with an Irish Catholic woman who wants to have an abortion. The woman is distraught, hurting, thinking that she’ll go to hell for “killing” a baby. Sister Harriet comforts her and performs the procedure. Unbeknownst to her, she has been inadvertently discovered by hard-drinking and hard-fighting ambulance driver Tom Cleary. It’s a strange scene; he follows her from a bar to the woman’s apartment, but hides out and doesn’t let her see him. While he doesn’t know exactly what has gone down, he is curious. He isn’t just some brute.

Or, we can look at the moment between Nurse Lucy Elkins and Thackery. Elkins has been avoiding Thackery since she injected cocaine into his penis (my condolences), and Thackery brings her into his office and tells her that there “is no room under his tent for proper girls.”

Tangent: I like the fact that they trusted the audience to remember the circus reference. Not many shows will trust them to remember that without a flashback.

The conversation between Thackery and Elkins is particularly revealing for how both of them handle it. As much criticism as I’ve given Thackery, he is a good doctor, and he isn’t a bad person, and his soft-spoken request to Elkins about not talking about what she saw that night is very much respectful. Elkins, for her part, is scared but takes in stride and is honest and even genuinely smiles at Thackery afterwards. They’ve come to an understanding, without some sort of manufactured conflict. They both want to be at the hospital, so they found a way to make it work.

Speaking of side plots, one of the main ones of this episode is the problems with the electricity. While trying to use an electric cauterization machine, the power surges and sets a body on fire. A nurse, not knowing, throws a bucket of water on the electric wand and she is electrocuted and killed. Both Robertson and Thackery are furious and want the contractor who installed the electricity either beaten to death or have the wiring redone. Herman Barrow, the superintendent of the hospital, tells them that he would take care of it. But it soon becomes clear why he doesn’t want anyone else involved; he took a huge kickback from the contractor and doesn’t want to be exposed. He has to give the contractor back the majority of the money he had been bribed with so that he would redo the wiring correctly. But that leaves him in a bind: he is in nine grand deep to a gangster named Bunky who, when Barrow asks for more time, rips out one of his teeth. Barrow is clearly a piece of human garbage but he is well-respected and the hospital needs him.

Long-winded rambling post aside, the point I’m trying to make is this: the plots are there to further the characters, not the other way around. They aren’t dropping in a new character to be an exposition dump, or to move the story forward. The story moves forward because of the characters. And that is really impressive.

I think this was a much better episode than last week, and that is saying something. I am almost afraid to keep watching, lest we some Breaking Bad-esque horrors coming around the bend for these characters.