Home
The Knick
The Knick 1.04 Review: “Where’s the Dignity?” 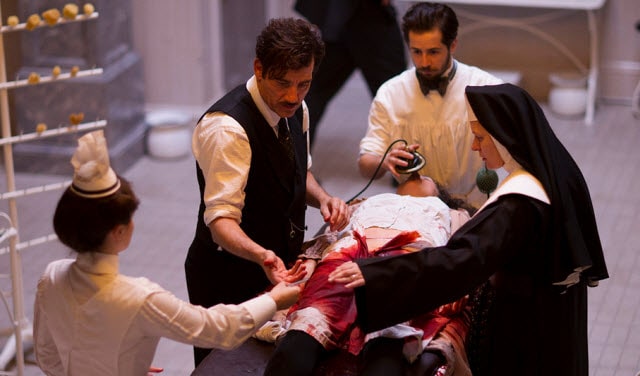 I have a confession to make: I’m not sure if The Knick is actually good or not. We’ve been inundated with praise for its concept, for its creator, for its cast. The show (we are told) is told so beautifully through the camera lens of Steven Soderbergh and through the power of the performance of Clive Owen. This show is supposed to be good.

And its not. Not really. The second episode was the highlight for me (though many like the pilot more). But it’s just kind of boring now. They have all the pieces needed to make a good tv show but they aren’t fitting together. They all seemed jammed together, mismatched, bent at the corners. A lot of the moments feel forced and uncomfortable, and not in such a way that is revealing about characters or informative about plot. It’s just boring.

Maybe I’m just not getting it here. Maybe The Knick and I aren’t on the same page. Maybe we just don’t click.

Or maybe I’m right. Maybe the show isn’t as good as it should be. I’m souring on this show only four episodes in, which under normal circumstances I would believe is too soon. And if you back as recently as the review previous to this, I call it a “well-made” show. And I still believe that.

There are many plot bits in the episode; it’s actually a pretty busy “character” episode, if you’re being charitable. I have two that I want to focus on:

Algernon’s story is probably the most involved. Algernon is scrubbing in to walk Gallinger through his procedure. Halfway through, he stops giving instructions and forces Gallinger to let him finish the surgery. Algernon saves the patient, and Galliner punches him in the face as retribution.

Now, here’s my issue: where in the hell did Algernon’s move come from? It hasn’t been hinted that he was the kind of person willing to let another die for his own gain. He has consistently shown that he only cares about doing the work, and doing it well. So he endangers the patient’s life? Would he have let him die to make a point?

And let us not forget: the surgery room is a surgery arena. There is a multitude of what I presume to be important (read: rich and white) people watching the procedure. Even though he succeeds in the procedure, it makes him look really, really poorly. What did he do, really? What did he gain except humiliation from Gallinger’s punch and humiliation from Thackery’s barbs? It doesn’t make any sense. Algernon can’t win.

Later on, Algernon starts looking over Gallinger’s shoulder. He’s getting in his cases, and basically pissing off the doctor. Like, I get why Algernon is frustrated; his talents are being underutilized and he’s being treated like an animal. But the things he’s doing aren’t brilliant political moves. They’re stupid.

“But Hunter, what if that’s a part of his character development? What if he’s just tired of being mistreated so he’s getting all up in their business?”

Well, anonymous questioner of my authority, I would agree with that statement, if the THREE PRIOR EPISODES hadn’t established him as more pragmatic than that. And there was no build-up to this; he was Algernon the doctor and now he’s Algernon the politician. Doesn’t sit right with me.

The other point I want to look at is the relationship between Sister Harriet and Cleary. Cleary knows that the good Sister has been performing abortions, and he is not happy about it. He demands a 60-40 cut of her profits, and that seems like how their relationship would go for a while.

And then a young girl stabs herself trying to kill her baby. And Cleary is emotionally stunned. He watched this girl bleed out in his ambulance and watched her be cut open and he watched her die. And this made him rethink his deal with Harriet. They’re going to work together to perform safe abortions, though he still gets the lionshare of the profits.

I don’t really have a problem with this part, except that the dialogue between Harriet and Cleary is really stilted and emotionless. I don’t know if that was on purpose, but it wasn’t good nonetheless. It also happened really fast; he went from totally against her and exploiting her to wanting to help her (while still exploiting he for money).

All of this goes back to problems I have overall. The parts are there, the parts are interesting, but they aren’t fitting together at all. I just don’t get it.