Home
Review
The Knick 1.05: “They Capture The Heat” 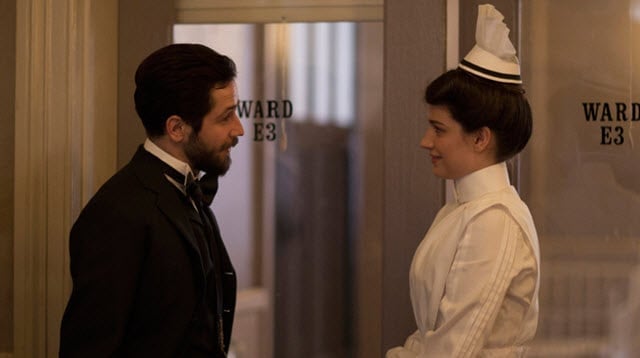 The last episode of The Knick had serious problems with characterization, especially and specifically Algernon. After painting him as strong, independent person who only wants to be a good doctor, they had him risk the life a patient just to make a power play. A power play, I might add, that never would’ve succeeded and did not, in fact, succeed.

That colored the whole episode. It made the rest of the events unbelievable. The conflict between Gallinger and Algernon is already real and powerful; why add this nonsense as tension?

Algernon, for the most part, was back to himself. He had a few moments that were clearly just bad writing (like when he explained to his patient using medicinal terms), but it was a massive improvement.

The problem with this episode was the visible strings being pulled and plucked. Nearly every scene had wires showing, pointing out the exposition and the character development and the small moments. It was an episode that looked like it had been written by a paint-by-numbers: say this here, do this there, have a moment with Nurse Elkins in fifteen minutes. It wasn’t bad, per se, but it was very, very obvious.

Obvious is bad; almost worse than bad writing in general. Obvious is boring and trite and clichÃ©d. The Knick, for the moment, is very, very unsubtle. And it drains all the real tension.

The episode opens with Collier (the gangster who owns Barrow) bringing one of his gangster friends to the Knick. Collier tells Barrow that if they don’t save his man’s leg, then he will shoot Barrow, Thackery (who was called in by Barrow for this surgery), and Edwards (who was just about to leave the hospital after being there all night). Now, we get it; if they don’t do good work, they all die. Tension is there.

But when stuff starts going wrong, they show Collier cocking his pistol. Like, really? We just learned about his murderous intentions like five seconds ago; do you need to remind us? It pulls you out of the story. There’s no subtlety there, no building of tension. You’re just pounded over the head with it until you get that THEY ARE IN DANGER. It’s annoying. The audience wants to feel emotion, not be told about it.

To go along with that, the scenes don’t fit together. They don’t follow at all. It’s weird. I don’t know quite how to explain it, but it just doesn’t… fit. It goes back to what I was saying about strings being pulled. All of the pieces are there, all of the actors and the concepts, but they are so blatantly in certain places so that you will feel the emotion they are trying so hard to convey.

Dr. Robertson is waffling over buying an x-ray machine; a Vanderbilt comes up out of the blue and tells him that he’s personally donated two of those machines to a different hospital. So Roberston buys the x-ray machine.

Don’t tell me that isn’t amateurish. That is just bad. I mean, did you need to do that? Did you need to have the Vanderbilt guy come up and shame Robertson into buying the x-ray machine? There wasn’t another way?

There are three or four more I can think of just off the top of my head, but I’d be just beating a dead horse. But enough negativity.

The Harriet/Cleary story was so much better. Sister Harriet and Cleary get drunk together after a job and have a really nice back and forth. It adds dimension to the Harriet character (which has been a really complicated, gray, and interesting character) as well as humanizes the rough Cleary. I hope we got more of that honesty between them as the show goes on.

One thing that I didn’t like too much was a storyline near the end. Thackery and Bertie are called in by Sister Harriet to help with a placenta praevia and they immediately wash up for surgery. Bertie is scared and unconfident but Thackery encourages him: they can save this girl and this baby.

But they dont. Which isn’t a surprise, because that kind of problem is a near death sentence. The weird thing is how they almost play it as a comedy. They go from the bathroom to the end of the surgery, in which the woman and baby are dead. The two are sitting around in a daze, covered in blood. It’s a really bizarre move that you usually only see when comedies are showing the aftermath of a tragedy. Maybe this was an artsy, out-of-the-boxy move by Soderbergh, but personally, I think it gives off the wrong vibe. Maybe he was using that type of transition as a way of showing how much of an ironic joke Thackery and Bertie’s work was, or something. All I know is that I don’t think it worked, just like I don’t think Algernon’s weird POV in the fight an episode or so back.

I got negative again; apologies. But, having seen a little bit of next weeks episode, I can say that the placenta praevia storyline provides for a very interesting and very exciting opening.

To wrap this up: better than last week, but still far, far from as good as this show should be. Let’s hope the improvements continue.