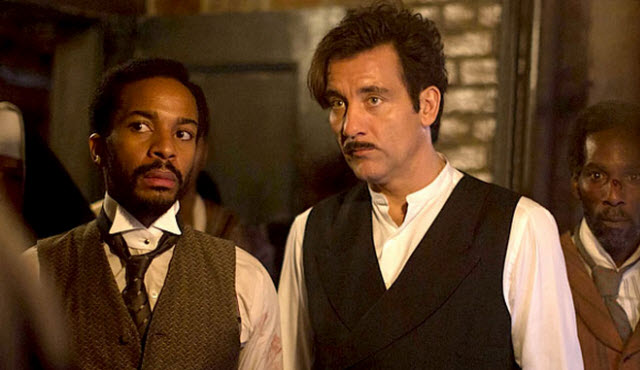 I keep writing and deleting paragraphs, because I don’t know what to say. I loved this episode, was entranced by it. I’m burning up on the inside and I am angry about the world that these characters inhabit. That’s a sign of good television, but the show hasn’t been good television. Or has it? Am I just missing it?

I went to dinner with a friend tonight, and she loves The Knick. She thinks that I’m crazy for not liking the show. I don’t even know what to feel about this show. This episode was so good, the payoff so powerful, but was it earned? Was the threat of awful racial violence, horrendous sexual violence, overwhelming the fact that the payoffs can’t be worked backwards? Yes, there was an attraction between Algernon and Cornelia. Yes, there was an attraction between Thackery and Nurse Elkins. The racial attitude of the city and their response to this tragedy is not surprising. But, while the episode executed its premise, and earned the emotion, the season and episodes that preceded it didn’t contribute enough. Horrifying thought: was the senseless racial and sexual violence used to push forward the sexual relationships between Thackery and Elkins, and Algernon and Cornelia?

This episode was fantastic; one of the most tense, most frightening episodes of television that I’ve ever seen. I was literally shaking with fear. I was trembling. My hands and fingers were cold. I’ve only felt that way two other times: Ozymandias (the greatest television episode of all time) and The National Anthem. I don’t like feeling this way, but man; what an incredible rush of emotions. It drains you and burns you up inside.

I thought Algernon was going to die. I was certain he was going to die. He was dressed well, like the black man who stabbed the cop. He worked on the cops wound shortly before he died. He was clearly in the crosshairs but he managed to escape to make out with Cornelia and I am just so happy that he’s alive.

The episode had a way of bringing out the true center of these characters; what they really cared about. Thackery is a doctor who normally wouldn’t jump into racial fray but knew that by not doing so he was dooming many black men and women to either death or harm. Bertie and Edwards do what they always do: be good doctors. Cornelia: a good person. Barrow: he loves his prostitute and immediately rushed to defend her, which is much more noble than I ever thought he was capable of. Gallinger is still garbage.

But Harry and Cleary. What a god-send these two have been for this show. As everything else is fumbling around their relationship gets better every week. Their characters get better every week. Cleary pulled an ambulance across town, by himself, for Christs sake. Harry braved mobs to transport a group of hurt black people to the church for safety. I don’t know what drives these two, at least not yet; but Harry obviously has something deep in her and Cleary is not the loutish brute that he portrays. He went toe-to-toe with a cop protecting a black man.

And god, how much do you hate authority after this episode? These cops are about law-and-order but they’ll sure as hell rape a prostitute and murder a black person. They don’t believe in the law; they believe in violence. It makes me so angry. Cowardice, weakness, worthlessness; those cops deserve a harsh shove off the edge of a cliff.

Perhaps all of this racial violence was meaningless; perhaps it was just used to push forward Elkins/Thackery and Cornelia/Algernon. Perhaps all of these people were raped and beaten and murdered so that Thackery could walk into the bedroom of a girl barely out of puberty and run his hands all over her. Perhaps this episode was about illicit love between a white woman and a black man, a relationship that had previously shown very little indication of being romantic.

Perhaps this whole episode was a way of retconning the absolute trash that came before it into something coherent and meaningful because having six previous episodes wasn’t enough time to build up for a payoff that made sense. Perhaps Cleary really is about protecting people from unnecessary harm; he does all those paid abortions out of the goodness of his heart. Perhaps John Thackery isn’t a cold-hearted jerk but is instead willing to put his life and career on the line to save a group of people he wouldn’t allow in his building a few episodes before.

The episode was good. It can be taken, viewed, both ways, I think. Up to you whether you believe The Knick created an emotional tornado or was a waterfall to wash away the sloppiness of the past. What do you think?

No, seriously; I’m asking. Because I have no clue.