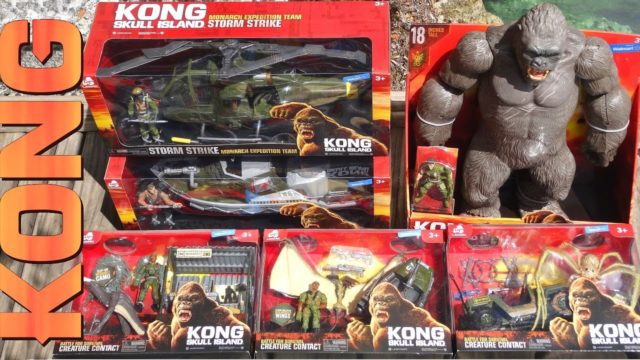 Kong: Skull Island wasn’t the biggest box office hit to come along in the Monsterverse but it wasn’t a total flop either. It did manage to create at least some merchandise that looks like it would be kind of fun to play with, for kids and adults who like to wax nostalgic. Admit it, if these had been out when a lot of us were kids they would have been insanely fun to play with, even if a couple of them are kind of creepy to look at. There’s just something about being able to play with monsters that’s appealing to a lot of people.

This heavily-modified boat was one of the best vehicles in the entire movie. It wasn’t all that fast but it was reinforced and it was fitted with a nasty-looking machine gun that could have deterred just about anyone or anything other than a Skullcrawler, or Kong. As it was the boat made a nice diversion so that the Skullcrawler would leave Kong alone and give the big ape time to regroup and make a comeback.

The big guy is the main reason why people went to see this movie in the first place, right? You can’t possibly want to play with the rest of the toys without getting him involved in the mix. Kong has been an iconic movie monster for a long time now, and has become a legend in the eyes of many throughout the generations since he’s been around for decades. Not involving him in this would be kind of a sin.

The giant spider in Skull Island was one of the many surprises since it wasn’t entirely expected. One moment the soldiers are making their way through a bamboo forest and the next thing one of the bamboo stalks has speared one of them through the mouth and affixed them to the ground. Only when they look up do they get the picture that this forest is only a cover for the predator hovering one hundred feet or more above them on its spindly legs.

These things are just flat out nasty since they’re seemingly all appetite and need for destruction and nothing else. They tend to attack, attack, and then attack some more as they seek out their prey. They were responsible for the death of Kong’s family as well, which goes to show that they’re not just nasty, they’re absolutely lethal. That kind makes one wonder just how Kong is going to do against Godzilla when the time comes.

Knocking these out of the sky seemed like it was easy for Kong, a minor nuisance to be swatted down when it was determined that they were doing too much harm and would bring on the Skullcrawler’s with all their noise. You can’t blame Kong for defending his home and attempting to keep the dangerous creatures below ground, but of course it was never seen that way.

You know the inner child in you is looking at these toys and getting excited.