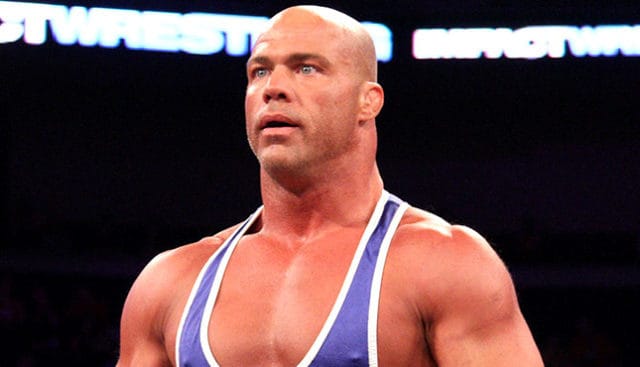 We’ve already established that Kurt Angle will be back in the WWE to some extent.  I predicted that he’d make a full return but there was no word on that at the time.   When we first read about his return it was said he’d be in a “limited role” and that he’d have to pass all the necessary physical tests to be let back into the ring.  Here we are only about a 2 weeks later and Angle is already saying he’s got a lot of matches left in him.   In an interview with Sports Illustrated the 46-year-old wrestler had this to say:

“If everything goes the right way with the physical, which I believe I would pass very easily, I believe there is an opportunity for fans to see Kurt Angle wrestle in WWE. But again, I have to reiterate, they have not talked about that at all.”

It sure sounds like this guy is ready and wants to come back, but just remember one thing.  The WWE has gotten more strict over the years with clearing guys to wrestle.  To that I’ll say this.  I’m glad they’re making it more rigorous.  I mean it’s not a coincidence that so many wrestlers are dying at a young age (I think it’s mainly drugs).  While we’ll never see a full scale NFL type investigation into this, it seems the WWE is in fact being proactive about the health of its wrestlers.  But at the same time, I’m reminded of the movie Rocky Balboa.  If Angle gets denied he should show them this clip:  “Let them play!  Let them play!”