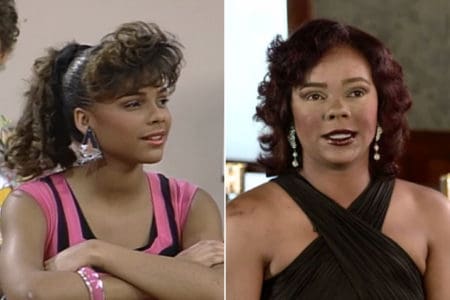 It does appear to be a pretty big slight that Lark Voorhies has had to endure by not being invited back for the Saved by the Bell reboot, but in some way it’s hard to feel sorry for her. Like it or not it could easily be due to whatever issues she’s been having throughout the years, be it schizophrenia or bipolar disorder as was mentioned by Jeremy Dick of TVWeb. There’s no need to make fun of her for this since mental issues tend to be pretty serious depending on their severity and what’s going on with the individual. But sadly it’s also something that not everyone wants to deal with on set since some conditions can cause a great deal of disturbance among the cast members, and as Lark has even gone on to state from her journal, as per Jeremy Dick:

“I have to admit I did feel a bit slighted and hurt when I was not invited to be part of the Saved by the Bell reunion, as well as other cast members’ events. Yet, of course, I also realized that having this puzzling disorder may have played a major part in that factual decision. With that in mind, I am truly thankful for having had the chance to work on a show that has been so successful.”

Defending the casting crew and anyone else that had a hand in keeping her off the show by stating that they were worried for her mental health and didn’t want to push her too far is about as disingenuous as it can get, but it’s true that keeping her off the set at this point so that she can possible focus on her own issues might be for the best. Apart from that feeling sorry for her when it comes to missing out to a reunion such as this is still kind of difficult unless you’re a fan of Saved by the Bell or someone that happens to empathize as easily as others breathe. So far the excitement for the show is largely focused on the idea that fans will be able to see several of the old cast members, and it might even be that many fans will be missing “Lisa” when all is said and done, but apart from that there are greater tragedies in life. It sounds cynical and uncaring doesn’t it? It’s best at this point that Lark figure out what’s going on in her own life, and her own head, before trying to take on anything that might stir that pot yet again.

Another member of the group that people won’t be seeing anytime soon is Dustin Diamond, aka “Screech” since Diamond pretty much burned every bridge he had left with the old cast when he published a tell-all book describing what went on behind the scenes of the show, which turned out to be a great deal of fabrication. In fact Dustin has been kind of open about how much of a jerk he is in the past several years, becoming the kind of guy that many would want to drop in a heartbeat for his attitude alone, and his actions probably a close second. It might not help that he was the butt of the joke most of the time on the show, the poor sucker that had to be the comic relief and rarely if ever got to have his way. Zack and Slater were the products of the 90s for Saved by the Bell, the charmer and the jock that got their way more often than not and were the guys that basically ran the school in their respective ways. Things didn’t change either as the cast grew up in front of us, as Screech continued to be the geek and oddball while Zack and Slater were still the kings of the school. Eventually their behavior was called out time after time, but somehow they still retained their popularity, at least until the show ended and they had to face life after sitcom, which is a daunting prospect for a lot of people.

Lisa went on to continue acting just as the others did, but her success was minimal most times as it kept her in the business and not much more. Unlike Diamond though she never burned her bridges, and if there’s even a possibility of her coming back for a cameo or for a short recurring role one can easily believe that she would take it gladly. Again it’s kind of sad, but still understandable, that this would happen, but from the standpoint of the fans it’s something that’s best accepted as plans for the show continue to move on. This wouldn’t be the only show that decided to move on without one of its more recognizable characters after all.

What We Learned from The Future Man Season 3 Trailer

John Krasinski and Steve Carell Have a Mini The Office Reunion

How Hawaii Five-O Landed Chuck Norris for a Cameo

Will Elsa Ever Have a Girlfriend in Frozen Sequels?

Whatever Happened to Adrienne Barbeau?