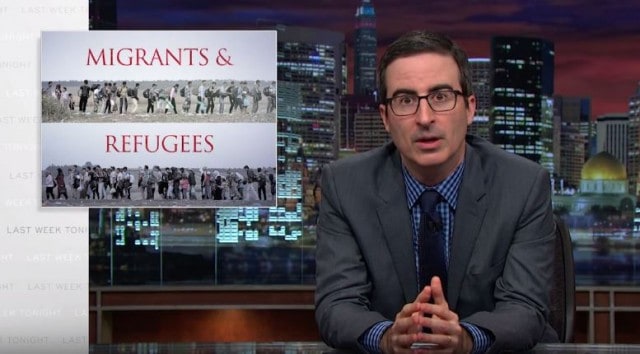 With so much misinformation regarding the Syrian refugee crisis in Europe being spread around the world, John Oliver decided to shed some light on the topic last night onÂ Last Week Tonight.

Oliver combated many of the fears that people have regarding these migrants (that they are lazy, that they are terrorists, etc.) with cold hard facts, while illustrating just how poorly so many countries in Europe have treated these individuals after all the struggling it took for them to actually get there. In fact, one shocking clipÂ showed a camera operator in Hungary actually kicking several refugees, including a couple of children. She later apologized, stating that “I’m not a heartless, racist, children-kicking camerawoman,” which led Oliver to sayÂ that must mean “she’s a loving, accepting children-kicking camerawoman cause the children-kicking part isn’t really up for debate anymore.”

Additionally, Oliver took some shots at a recent FOX News segment and even made a joke regarding the incredibly large audience that watchesÂ NCIS: New Orleans. However, the best moment from last night’sÂ Last Week Tonight cameÂ when Oliver reunitedÂ Days of Our Lives‘ EJ and Sami (played by James Scott and Allison Sweeney), as the two soap opera stars helped the host not only continue to share important points but also make a young refugee girl’s day.

So what exactly do I mean? It’s too good to spoil here. Check out the video fromÂ Last Week TonightÂ below to see what I’m talking about.